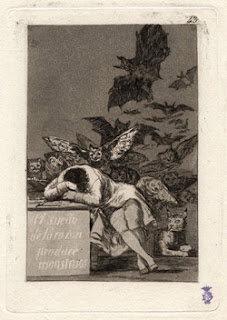 Just found out that "The full set of Francisco Goya’s 80 haunting images from Los Caprichos (“The Whims” or “The Fantasies,” published in 1799) confront human hypocrisy, pretense, fear, and irrationality, picturing them in every conceivable form." is on display at the Cincinnati Taft Museum this month.

It is a must see! I have always been facinated by Goya. He did a lot of art about the hypocrocy he saw around him which he concealed for fear of being arrested but made a lot of money painting portraits of rich people.

He is well known for his Disasters of War series published after his death showing his reaction of the wars between Napoleon and Spain.

By the way, check out this documentary on Goya by Robert Hughes: Goya: Crazy Like a Genius


Interesting factoid about war and artists: When I was in Prague, I found out at the Alphonse Mucha museum that Mucha was tortured by the SS when Germany invaded what is now the Czech Republic because he was a known Czech nationalist. He died a couple weeks after being released.
Posted by Christina Wald at 8:58 PM