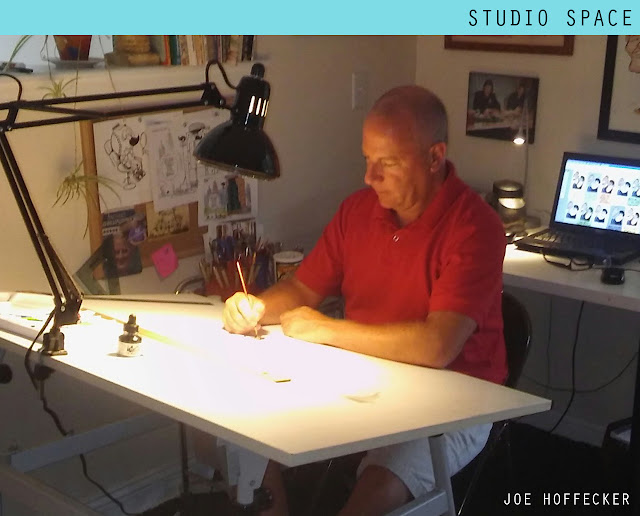 Joe Hoffecker is a native Cincinnatian who began cartooning at age 11 with a monthly comic strip for his grade school newsletter. A child of considerable dinner table political conversationalist parents, Joe gravitated towards editorial cartooning as a teen, particularly following the works of the works of the Cincinnati Enquirer’s Jim Borgman and the Dayton Daily News’ Mike Peters. After cartooning for the student newspapers at Elder High School and Northern Kentucky University, Joe landed a freelance cartooning gig at The Downtowner, followed by being hired as a design artist and editorial cartoonist at the Cincinnati Business Courier in 1987. In addition to the Business Courier, Joe’s work appears weekly in several Business Courier sister business journals across the U.S., and he also pens a cartoon each week for the international Sports Business Journal. Joe has won numerous awards for his cartoons, including from the Society of Professional Journalists and the Press Club of Cleveland. A fan of the Queen City, Joe resides in the West End with his children and a golden retriever.

Location: Cincinnati
Website: Facebook.com/HoffeckerCartoons
On the Drawing Table: This week’s cartoon in progress.
Coming out soon: A series of caricatures of local celebrities.

How did you get your start as a professional artist?
My first paying job as a cartoonist was for The Downtowner, a defunct weekly newspaper, which covered and was distributed in downtown Cincinnati. By that time, I had drawn over 200 cartoons through my high school and college years, so it was nice to finally get paid! They wouldn’t publish my more opinionated ideas on downtown issues; most of the cartoons were ‘positive PR.’ Still, it was great to be drawing on a regular basis and my collection of work from The Downtowner helped me get hired at the Business Courier.

Describe your work.
I think today my style is more my own than it’s ever been. When putting pencil to paper, I used to think, “How would Jeff Stahler draw this, or what would Borgman do?” In recent years, the pen just sort of flows much more naturally, although I can still spot all kinds of influences. Also, my drawings are much more simplistic than in years past. I once felt that I had to draw a very complex scene but now I really just want to convey the point--or the joke—quickly, rather than have the reader spend time trying to find their way. 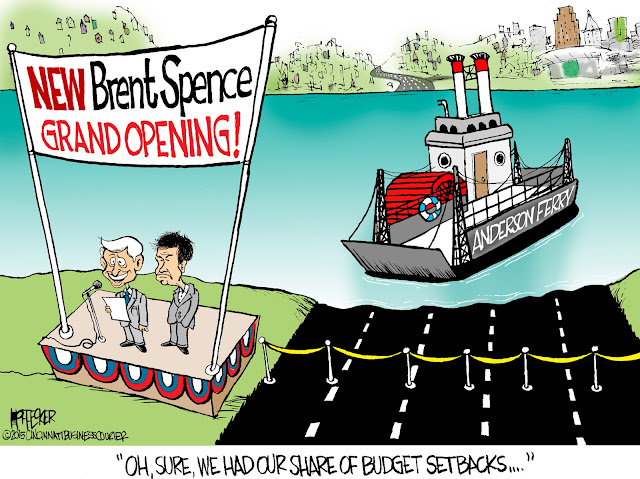 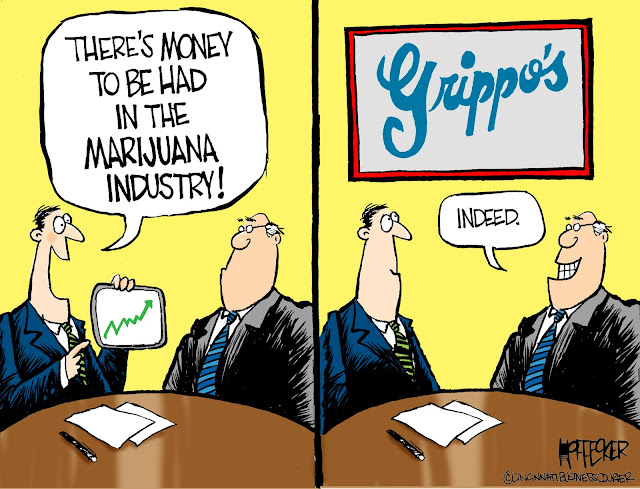 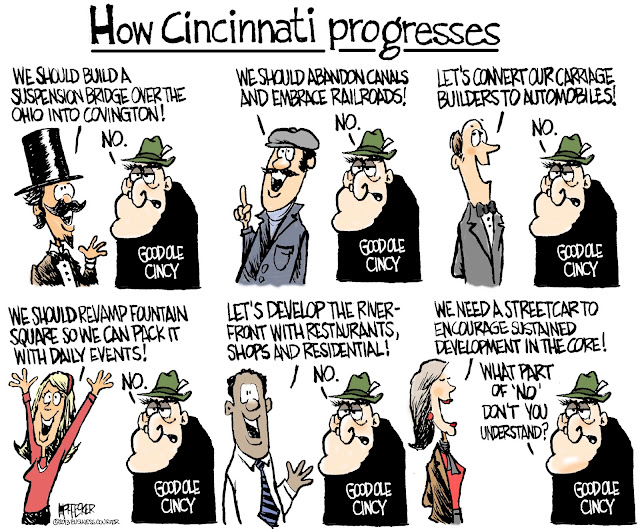 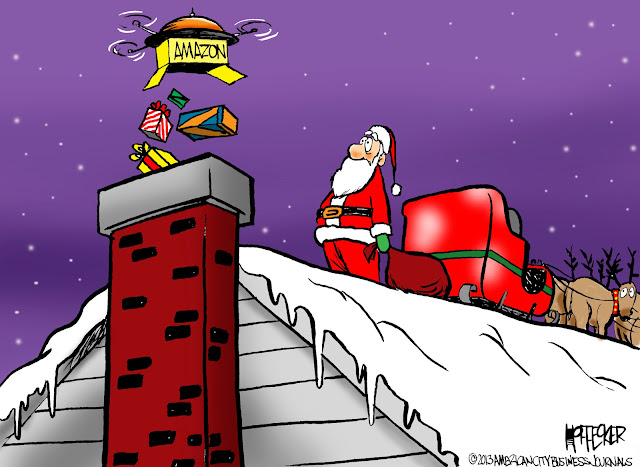 Tell about your workspace.


I’ve carved out a small corner in my second-floor living space. My drawing table faces the interior, so I can catch some TV or listen to music while I’m working. Behind me are bay windows facing downtown Cincinnati. I have a few chairs facing the windows, so I’ll use that space to stare outside, sketch and let my brain wander.

What are your favorite materials digital and traditional?
Both. I mentioned my drawing style has become very simple. That’s another way of saying I’ve become lazy! I first sketch in pencil, then cover that with pen and ink. This is still the part I love the most; there’s something about the ink hitting the paper, varying the line widths, cross-hatching…that I still get a kick out of, particularly when it works! After that, It’s all digital for coloring and correcting. I can’t remember the last time I used white-out…do they still make that stuff? 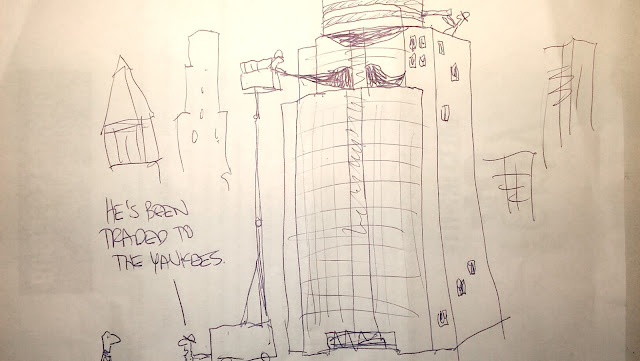 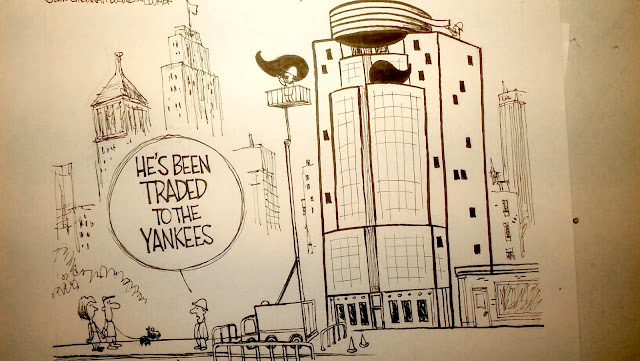 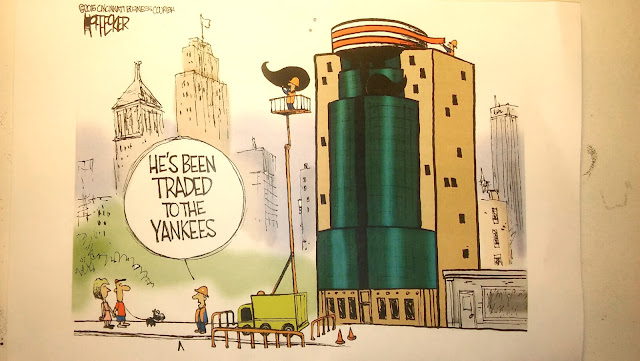 What’s your typical workday/work session like?
I discuss topics with the editor of the Sports Business Journal on Monday afternoon and the Business Courier’s editor on Tuesday afternoon and draw each cartoon that evening, respectively. The challenge for me is my cartoons are published days later—actually a full week for Sports Business Journal—so I have to provide topics that will still be fresh when our readers see them. This forces me to sort of wait until the last minute to draw, but I’m always paying attention to the news and formulating ideas. I have ‘self-published’ on social media at times when there’s big news that I know can’t wait for the next issue to publish. And, of course, there are occasional cartoons ideas that are so opinionated that they won’t get past my editor’s desk, or not appropriate to our publications, so I’ll put those our on social media as my own work.

What do you do to keep yourself motivated as you work?
Well, there are not many editorial cartoonists being published on a regular basis anymore. I am very fortunate to still be given a 5 x 7 space to fill twice a week and get paid to do it. My motivation is to draw cartoons that are worthy of that space provided to me. I remember Borgman once said that he grades his cartoons in baseball terms: a single, double, triple or home run and, as a fellow baseball fan, I do the same (I’ll also add strike out to that mix!). I’m my worst critic and there are times when I’ve pushed the send button and then wanted to crawl into a cave; but most times, I can’t wait for people to see them. The toughest lesson I’ve learned is to not always go with the first or second idea, no matter how good you think it might be. It’s tough, especially when you’re up against a deadline, but it takes some discipline to not always swing at the first pitch, but to wait and see what else is offered.

What is your dream job?
I wish I had time to do more art, other than cartoons. I really enjoy the Red Door Project, the roaming monthly gallery exhibit in Over-the-Rhine. The works are auctioned, so there’s a pay off, but for me, I really enjoy the opportunity to work more freely and with different materials. The Red Door provides a theme each month, which gets my brain going in different directions, and they provide a deadline, which ‘m already accustomed to, but still need. If I could do more of that, I would love it!

Do you keep a sketchbook?
Yes, I always have a sketchbook with me, but rarely use it for my weekly cartooning. In fact, ideas are exchanged via email with Sports Business Journal and for the Courier, I literally draw a very, very crude sketch on a piece of scrap paper. It’s barely a step up from doodling an idea on a bar napkin! My sketchbooks are used more for letting my mind wander, sketch something I see that I want to record, or to practice drawing something that’s really challenging. And caricatures are very tough for me to draw. I really have to sketch them over and over again so sketchbooks are good for those exercises. 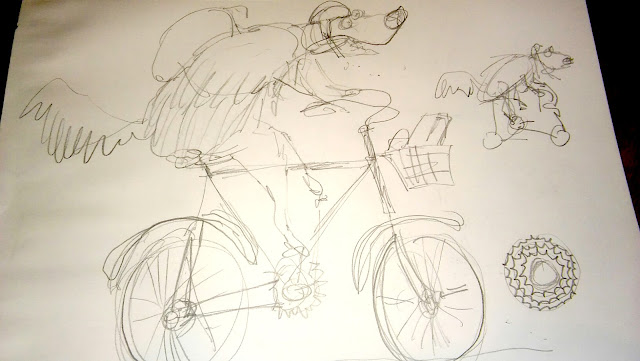 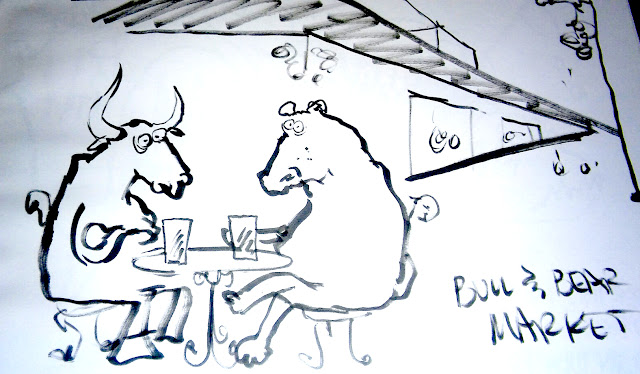 What do you listen to while you work?
Some vinyl or an old mix cassette tape for music on occasion. During nice weather, I’ll have the windows open and taking in the sounds of the neighborhood. Actually, something that I don’t often get to enjoy is complete silence, so I’ll sometimes take advantage of nothing!

Who are your artistic influences?
In my opinion, no other cartoonist will ever come close to Pat Oliphant. He will be the only contemporary artist that can truly be called a political cartoonist. His art and his ideas seem to break new ground with each panel. Others that I’ve studied and admired are Jeff Stahler, Jeff MacNelly, Jerry Dowling, Mort Drucker and Mike Peters. Illustrators such as Ronald Searle, Geoffrey Moss, Ralph Steadman, Gerald Scarfe, Chris Payne, Edward Sorel have all been influences. My favorite American painter is Edward Hopper. On a personal level, Jim Borgman had a huge impact on my career. He is not only someone whose work I admire, but he’s a very gracious friend and I benefitted greatly from his advice and encouragement. If not for him, I would not be drawing today, and I can’t thank him enough.

What do you do that is not art related that inspires you?
I’m the lucky father of three wonderful and creative kids and I feed off of their thoughts and ideas. I also enjoy riding my bike.

What was the best advice you got in your career so far?
Draw. Draw a lot. It’s how you get better.

How can we get best follow your art online/on social media?