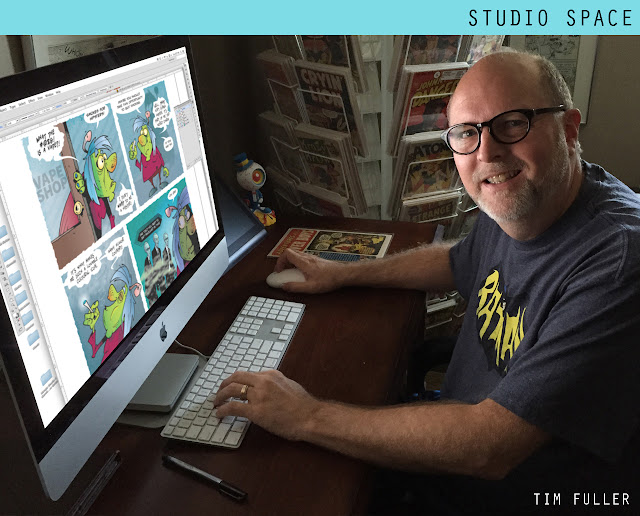 TimFuller is a Cincinnati area illustrator and graphic designer who works primarily as a cartoonist and a comic book writer/artist. He began self-publishing his cartoons in Hooha Comics in 1978. He contributed the series “The Blue Beagle,” to Fantagraphics’ Critters and “Cap’n Catnip” to Charlton Bullseye. Tim created countless strips and cartoons for various fanzines, mini comics and magazines, including The Comic Buyers Guide and Starlog Magazine.

During the 90s, Tim worked largely as a graphic designer, but managed to find illustration opportunities. He created “SuperAmerica Man,” an advertising character for a chain of convenience stores. In 1996, he created a series of animal characters and signage for Jeepers, a jungle-themed restaurant. He created venue posters and ad art for musicians Jonathan Coulton, Wake the Bear, and The Residents. Since 2001, Tim has been the advertising artist for the Saint Joseph Drama Club, creating cartoon posters, banners and programs for their yearly shows.

But in 2006, Tim was lured back to making comic books by the advances in digital printing and the “Print-on-Demand” model. He began actively creating, publishing and selling his cartoons again. He collected his various “Blue Beagle” and “Cap’n Catnip” stories into books. In 2009, he edited and published a Cincinnati-based anthology, deliciously titled “Twelve-Way with Cheese.” Tim’s ongoing projects include The New Adventures of Cap’n Catnip, SHAM Comics, his rewritten golden age stories, and “Zombie Marge,” a web comic and comic book, which won second place at S.P.A.C.E. in 2014 and a Larry Award for Best Comic 2015 at Tricon in Huntington, WVa. 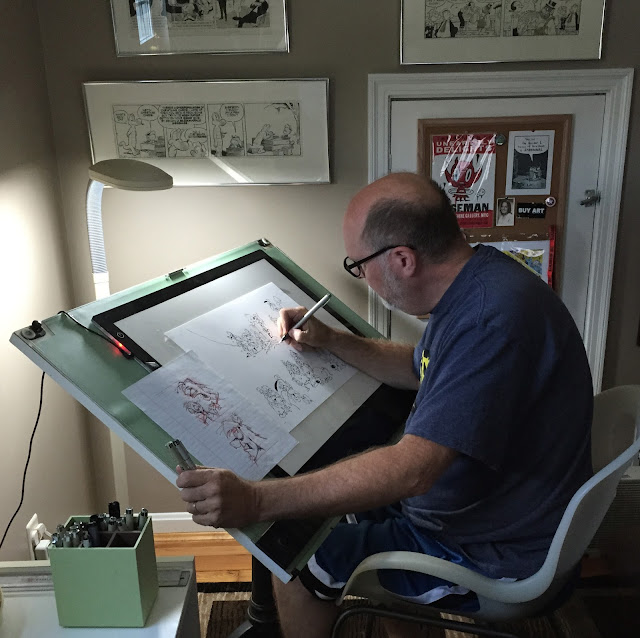 How did you get your start as a professional artist?
I don’t remember a time when I wasn’t drawing. As a child, I would sit for hours drawing cartoon characters off the television and out of comic books for fun. When I was in middle school, an art teacher steered me toward a career in illustration. I eventually chose to attend Ohio University because their design program was one of the best at the time. Graphic design sounded like a good, stable career choice to put food on the table while I tinkered with the cartoons on my own time. 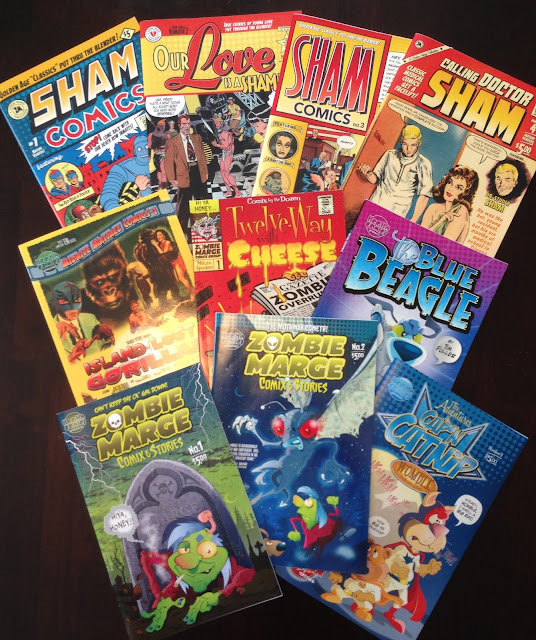 Describe your work.
I think of myself primarily as a humorist. Most of what I do involves telling stories in one way or another and I just can’t be serious to save my life. I don’t often do stand-alone illustrations. Even the posters and advertising projects usually involve a narrative of some kind. Currently I split my time between writing and drawing the Zombie Marge web strip and writing for the SHAM Comics project. SHAM was developed over the last few years, using old comic books from the 40s and 50s that are in public domain. The pages are scanned and all the original text is removed, often without ever reading it. Then, based only on the pictures, the stories are rewritten as adult humor pieces. For instance, a bland romance comic from the 50s suddenly becomes something more torrid and twisted. Both projects are a blast to work on and are very satisfying creatively. 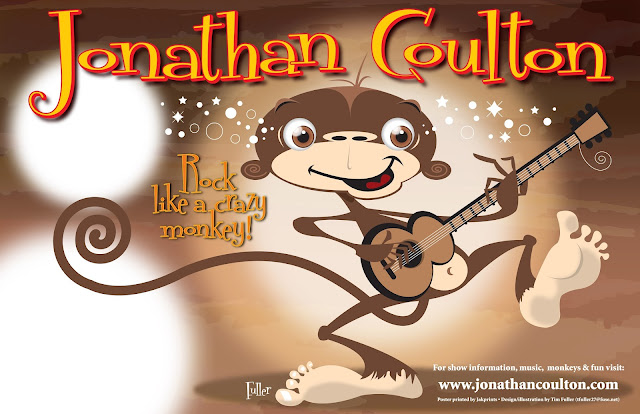 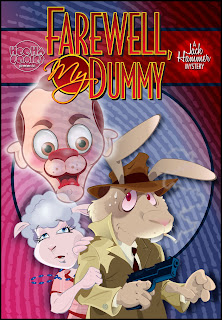 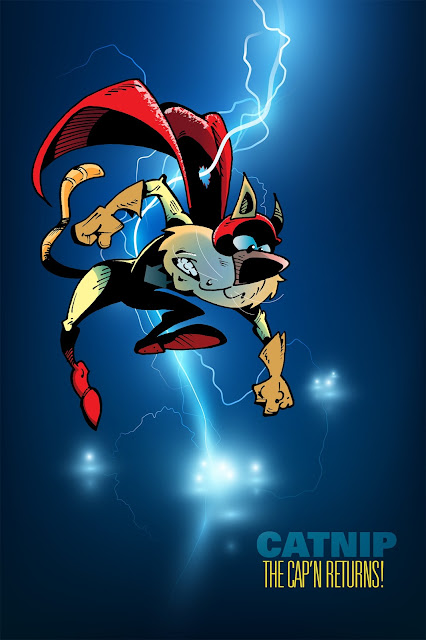 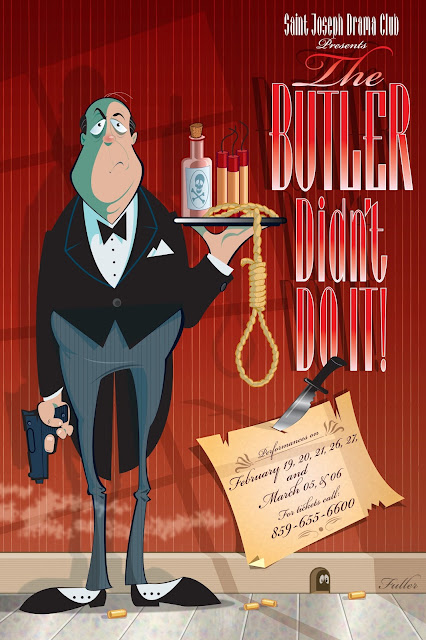 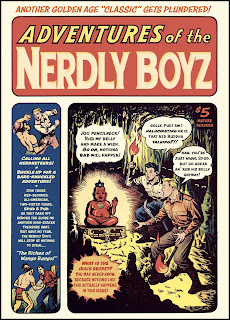 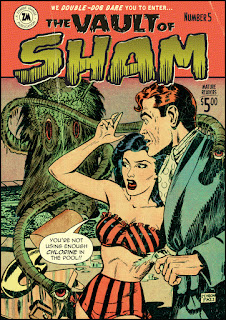 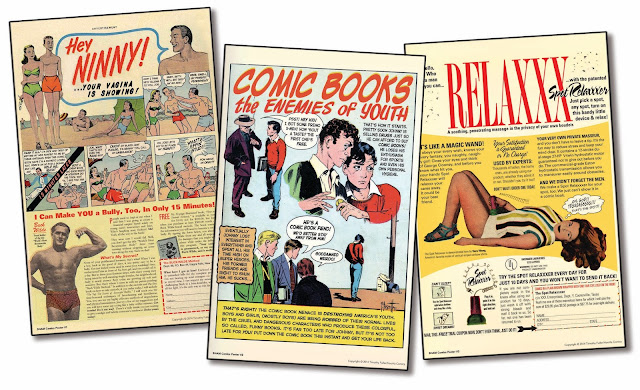 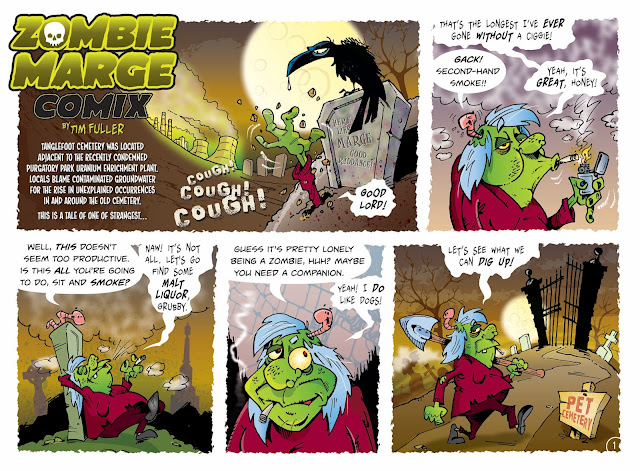 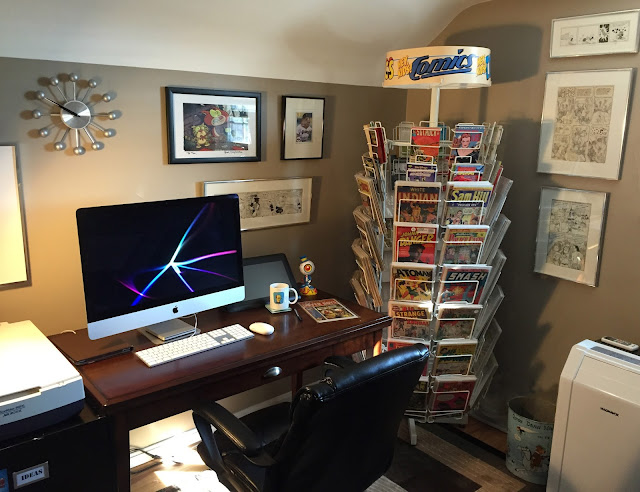 Tell about your workspace.
I recently moved from a large cluttered workspace in the basement, which I shared with 2 cats, three dogs and the occasional bat, to a small bedroom on the second floor with lots of natural light. Oddly enough, at the same time I changed from working primarily at night, to doing my most creative work first thing in the morning over coffee. The move forced me to downsize the contents of the studio to just the essentials. At one end of the room are the computer, scanner and Cintiq. At the other end is my drawing table. In the middle of the room, my unpaid intern, Mikey, is usually sleeping on the rug. Just for fun there is a large comic book turnstile rack full of golden age comics in one corner and a lawyers bookcase full of Popeye toys in the other corner. I like a very neat, organized workspace, so the closet houses floor-to-ceiling shelves for the printer and supplies to keep down the clutter. 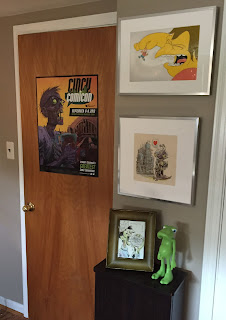 Are your favorite materials digital or traditional?
I still pencil and ink my comics in the traditional way, but I love having the computer for the more tedious tasks like coloring and especially lettering. I write very fast in spontaneous bursts of inspiration and then spend lots of time editing and polishing the copy and punching up the jokes. That’s hard to do with hand-lettered material. The computer allows me to experiment more.

What’s your typical workday/work session like?
At the moment, I’m working the day job as a graphic designer and spending evenings and weekends working on comic projects. At the end of this year I plan to retire from corporate work and focus full-time on the comic books and whatever else catches my interest. There seems to be no end to ideas I’d like to tackle. 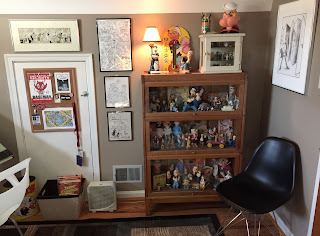 What do you do to keep yourself motivated as you work?
It’s not difficult to stay motivated. Since I’m a one-man production team, there are always lots of different jobs to do on a project. That keeps me from burning out on any one task. When I head to the studio, if I’m in the mood to draw, I can work on Zombie Marge. I can work on SHAM Comics if I only feel like writing that day. Or I may choose to letter or color. I also love to work on the typography for the various projects and usually do that job first. It seems to keep me from getting bored and keeps the projects from getting stale. The walls of the studio are covered with original artwork by friends and illustrators that I admire. This serves as a great inspiration for me. 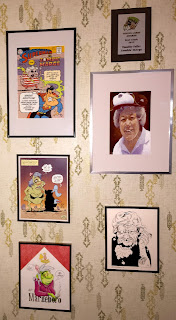 What is your dream job?
I’m pretty much doing it now. I have the outlet to tell the stories that interest me and seem to entertain my readers. Once I retire, I’d like to do more of the same. I want to begin drawing a graphic novel that I wrote several years ago and had to put aside for Zombie Marge. It’s a film noir, funny animal murder mystery about the death of a beloved ventriloquist, titled, “Farewell My Dummy.” I’d also like to do a little autobiographical strip about my years in advertising, called “Corporate Monkey.”

Do you keep a sketchbook?
I have to admit that I don’t sketch as often as I’d like. Since I work the day job currently, my studio time is always focused on the particular project at hand. So I’m sketching for some specific purpose. Once my time is my own again, I plan to start each day with some warm up sketches.

What do you listen to while you work?
If I’m drawing, I’ll be listening to rock music, a couple of my favorites include Aimee Mann and Shriekback. Sometimes I will put on podcasts like Marc Maron’s WTF, The Jimmy Dore Show or Never Not Funny. If I’m writing, it has to be more ambient, instrumental music, usually Brian Eno.

What are you reading/listening to on Audible?
I can’t listen to books while I work; I get too focused on the story. Currently I’m reading Damned by Chuck Palahniuk, Creeping Death from Neptune: The Life And Comics Of Basil Wolverton, and The Book of Mothman by John A. Keel. And I’m always reading lots of golden age comics for possible SHAM material. 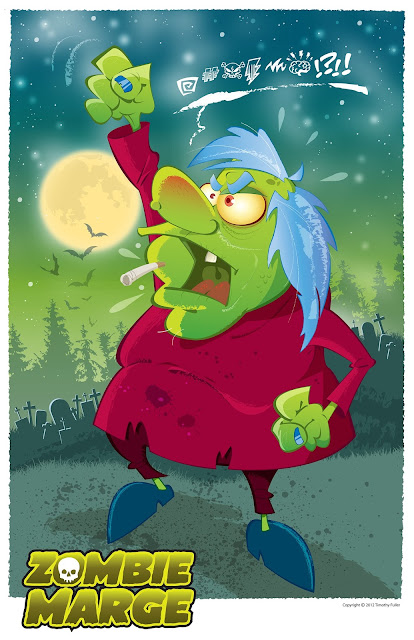 Who are your artistic influences?
Everything influences me! I sought out and studied lots and lots of work, fine art, commercial art, comic art, film, animation and outsider art. The comic strips Popeye and Pogo and the comic book version of Mad have had a lasting effect on me. But my drawing seems most influenced by the Hanna-Barbera cartoons of the early 60s that I watched as a kid, particularly Top Cat. For my own enjoyment, I will go out of my way to see any works by Mark Ryden, Jack Davis, Dave Cooper, Harvey Kurtzman and way too many more to mention here.

My writing is definitely influenced by my steady diet of the Firesign Theatre.

What do you do that is not art related that inspires you?
When I’m not working, I’m doing things outdoors with my wife and our family. Between us, we have six children and a dozen grandchildren, so there’s always something going on. I love to spend time with my dogs as well.

What was the best advice you got in your career so far?
I got a piece of very valuable advice early on that completely changed the way I approached my work. While still in high school, I made a trip to New York to one of the only comic conventions at the time. DC Comics had announced they would be at the show looking for new talent and I was determined to put my work in front of them. My comic portfolio at the time consisted of me trying my best to be a superhero artist and not entirely succeeding. In the back of the book were some of my original humorous strips. Carmine Infantino took a look at my book and very politely suggested I might need some more practice. I dejectedly left the review and wandered into an art display of underground cartoonist, Vaughn Bode. Vaughn saw my portfolio under my arm and asked to see it. After going through all the pages of me trying to draw like established DC artists, he came to the funny stuff in the back. He pointed out that it looked to him like I enjoyed the cartoons much more than the other “serious” stuff. He suggested that I should concentrate on what made me happy instead of trying to draw in a corporation style. I’ve followed that bit of wisdom ever since and been very happy.

What is your favorite color?
There is an aqua/blue that I use in Zombie Marge all the time. It’s 70% Cyan and 12% yellow. When I use it as a transparent wash over the other colors, it does amazing things.

How can we best follow your art online/on social media?
I keep the Zombie Marge Blog up to date with news, convention appearances, new strips and links to buy the books online. Plus, that’s where the Zombie Marge strips run first. If you are so inclined, you can read every strip in the archives. I’m not a big communicator on social media, but I do occasionally post in-progress art to my Facebook page. 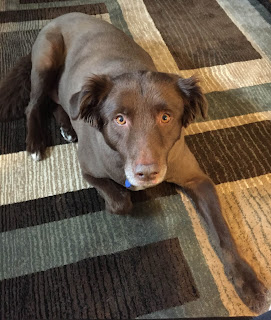 Posted by Christina Wald at 5:59 PM