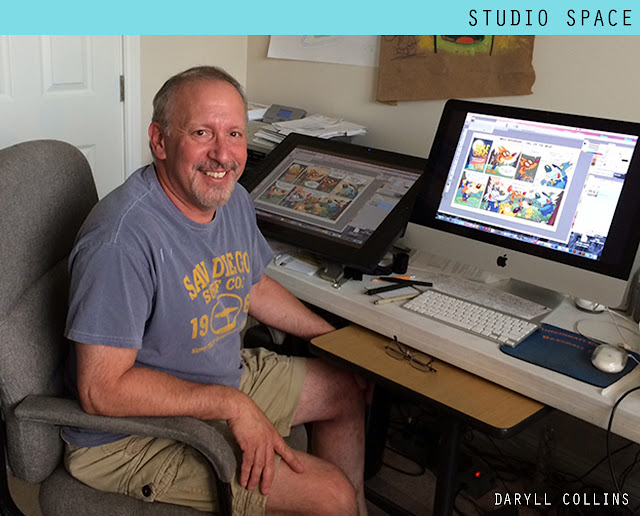 Daryll Collins is a freelance cartoonist/humorous illustrator for a variety of clients. He graduated from Youngstown State University with a degree in Commercial Art and also attended the Columbus College of Art and Design.

His work has appeared on:
-Greeting cards for Hallmark, American Greetings and Gibson.
-The Stink Squad book series for Simon and Schuster.
-Magazine illustration for Boys’ Life, SI for Kids, Time(Asia), Disney Adventures and National Geographic World among many others.
-Also character design and developmental art for Hanna-Barbera/Cartoon Network and Film Roman. 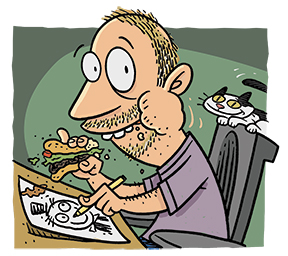 Location: Independence, KY
Website: www.daryllcollins.com
On the Drawing Table: I’m finishing up a series of illustrations for Scholastic that will be animated and used for a video about Johnny Appleseed.
Coming out soon: I have a new comic strip called “Wolf Gang” that will be featured monthly in the Cub Scout version of Boys’ Life Magazine. It features the antics of Wolf Pack Den 9, a group of kid wolves that are scouts. Also, I just recently finished a children’s book called “Snitch & Sneer Fairy Tale Crashers” now available on amazon.com just in case you’re interested...
How did you get your start as a professional artist?
My first job as an illustrator was working in the art department at WCMH-TV (NBC) in Columbus, OH. It mostly involved creating station ID’s/promotions and news graphics.
There weren’t a lot of funny things going on in the news so I didn’t really get to utilize my cartooning chops until my next job at Gibson Greetings in Cincinnati.

Describe your work.
My work would best be described as funny, energetic and colorful.
The type of work I do these days is a little bit of this and a little bit of that. The bread and butter industries that I used to depend on for the majority of my assignments are going the way of the dinosaur!
Magazines, greeting cards and print in general are not the plentiful sources of income they once were. It’s a real scramble these days to secure work. More illustrators are competing for smaller slivers of an ever diminishing pie. Also, budgets aren’t what they used to be so you’re doing more work for less money. 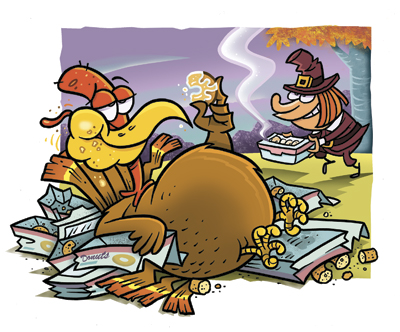 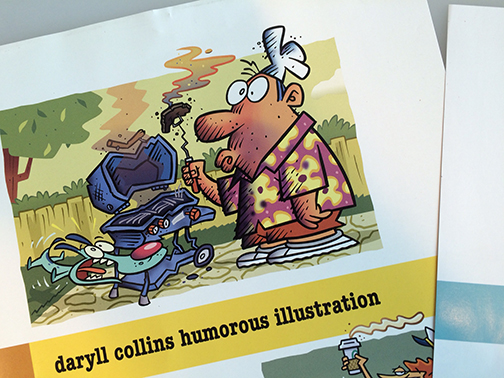 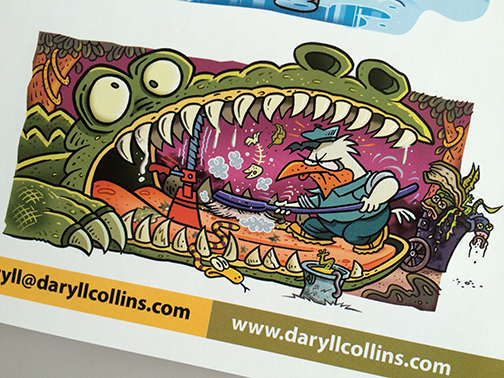 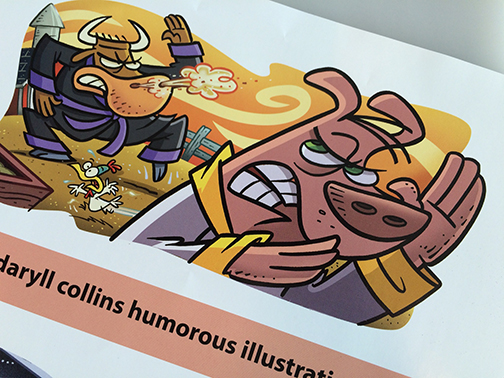 Tell about your workspace.
Right now I’m working in about 1/6th the space normally devoted to my studio. I recently got married and sold my condo. The only space available in my wife Dawn’s home was an extra bedroom. Things are a little cramped and I’ve held back on much of the funky decor as the plan is to build a new studio in our basement. That will happen sometime next year. I do miss having all my supplies, books, knick knacks and TV in one place. Until then I’ll make do! 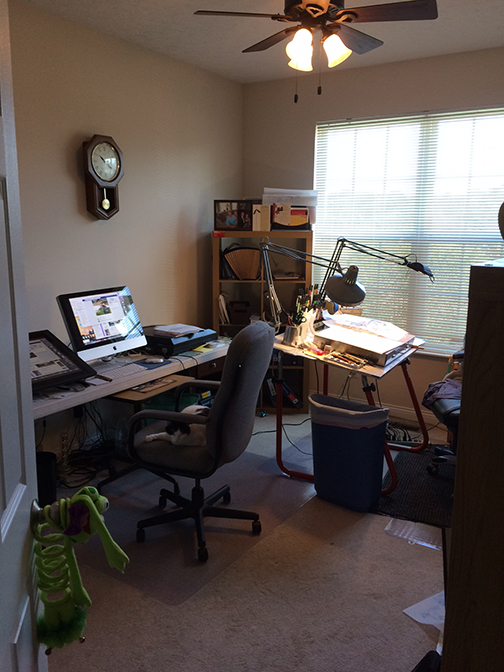 What are your favorite materials digital and traditional?
I’m pretty disappointed in the traditional materials I’m forced to work with these days. There are less artists using them so the quality has greatly diminished. Manufacturers cannot afford to make their products with the same attention to detail and performance. Especially in the quality of the paper cartoonists use (Bristol Board). It’s become such an issue that I’ve started to digitally ink my illustrations with a Wacom tablet. The program I normally use for this is Illustrator, but I’m starting to dabble in Manga Studio and Photoshop. I color all my work in Photoshop as well. But it’s not as satisfying as sitting down with pen and ink to render a cartoon. Also, I cannot tell you how many times these days I snap off the ends of pencils while drawing or rip through tracing paper. Has anyone else noticed how loose the lead inside Ebony pencils has become? It’s an outrage! 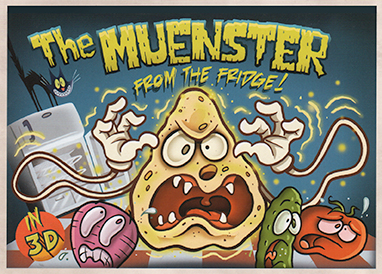 What’s your typical workday/work session like?
I try and keep a regular schedule and am usually in my studio by 7am. The amount of hours I work on any given day depends on deadlines. I do like the flexibility of being a freelancer. I can make appointments, etc. during the day and finish my work later on.

What do you do to keep yourself motivated as you work?
The thought of paying my monthly bills is a great motivator! But I genuinely love what I do and sometimes you get a bit burned out creatively, but it never lasts. We are compelled to draw and create! I also think looking at the work of others, and there is a treasure trove of talent here in the Cincinnati area, is inspiring. Oh, and coffee.

What is your dream job?
I would like to be doing my own comic book or animated series. 98% of my work is in the kids market, although my true sense of humor would probably fall into the R rated category. Also if we are talking any kind of dream job I might as well say a successful career playing music, playing baseball, hosting a talk show or being in a sitcom would be pretty cool. But I do feel blessed to be making a living doing something I love.

Do you keep a sketchbook?
Yes I do and it’s kind of a sketchbook/diary. It’s a repository for my thoughts, social commentary, top 10 lists, rants, jokes and gags, quirky idea sketches and character designs. I should probably do more life drawing and sketching of actual places. Illustrators like Christina Wald make me feel like a slacker as she is an avid and prolific on site sketcher. 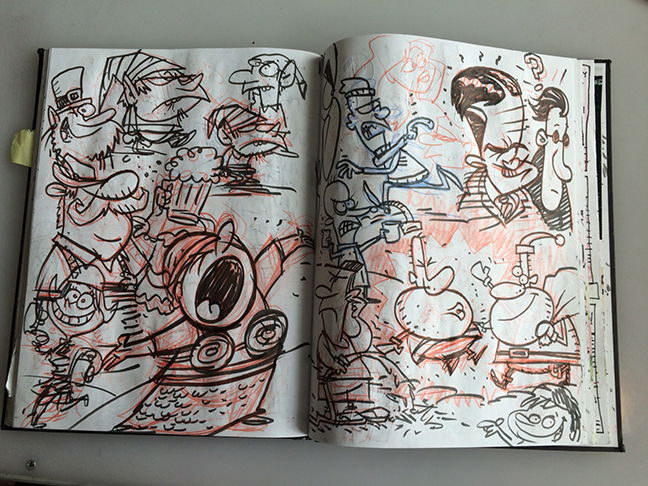 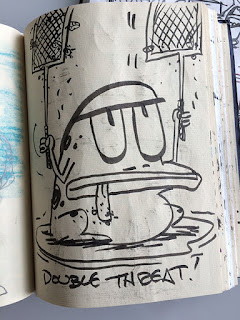 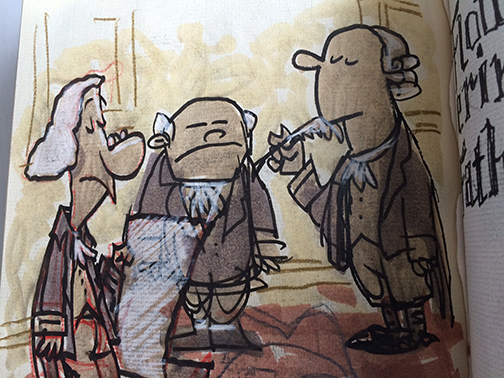 What do you listen to while you work?
While I’m writing gags, I don’t like any competing voices, so silence rules. I could listen to instrumental music I suppose, but prefer silence. Otherwise I LOVE music! I usually put my 9,000 something song iPod on shuffle play and away we go! Sometimes I’ll listen to podcasts or a Reds game if I’m working at night, depends on my mood.

What are you reading/listening to on Audible?
I tend to listen to podcasts/conversation if I want something different than music. This is such a solitary way of living that I like to have conversation going on even if I can’t actually contribute to the discussion! I do manage to read a lot of magazines/articles and 3 or 4 books per year. I usually like to give my eyes a rest after mind melding with a piece of paper or computer screen all day so maybe I should take in more audio books in my spare time.

Who are your artistic influences?
My greatest influences were the early limited animation Hanna-Barbera and Jay Ward Studio cartoons. I can still see their influence in my work to this day. That graphic cartoon look you would see in advertising of the late 50’s and early 60’s for sure.

What do you do that is not art related that inspires you?
I play in an adult baseball league and although I don’t think it necessarily inspires me art wise, it’s a great release from sitting on my can all day, drawing. Plus it allows me to socialize, especially with people outside the arts community. You want to talk about two worlds that never seem to intersect… sports and art! I used to play guitar and I’d really like to start playing again, even if I don’t have the time to get my skills up to the level I did when I was a teen/twenty-something. As my wife Dawn says, “You don’t have to play like Carlos Santana or those guys in ZZTop, just play!”

What was the best advice you got in your career so far?
Hmmmm… I don’t think I’ve gotten any really great career advice. If I could go back in time and talk to an 18 year old Daryll I would say,  “Go to art school instead of a university art program. You’ll develop your art skills quicker and with more depth.” And, “Concentrate more on training your eye to do caricature.” There is always a demand for that, but it’s very hit or miss for me. I was lucky to have supportive parents especially coming from a very blue collar environment in Youngstown, OH. I had talented friends who’s folks told them in no uncertain terms that they were not going to pursue an art degree, pick something that will allow you to make a decent living!

What is your favorite color?
That Huckleberry Hound blue. It’s kind of Aquaish.

How can we get best follow your art online/on social media?
Social media exhausts me! Every illustrator out there is screaming, “HEY, LOOK AT WHAT
I’M DOING! HERE’S MY LATEST CREATION! HIRE ME!”, with a series of hashtags following. How much of this social networking really results in assignments? Seems like a lot of wheel spinning to me. In fact I don’t know what the protocol is these days for freelancers to successfully secure work. This industry has changed dramatically in the last 10 years and the days of advertising in a directory or two and waiting for the phone to ring are over! I post things on Facebook and my family and friends seem to like them but as a marketing tool, the jury is still out.

I do send out email solicitations to art directors and have my work online at my website, www.daryllcollins.com and http://www.childrensillustrators.com/illustrator-details/daryllc/id=1322/ and http://www.directoryofillustration.com/ArtistPortfolioThumbs.aspx?AID=896

I used to do a blog, http://www.cartoonsuccotash.com/home/ but it’s been kind of neglected. If you start one you better add new content on a regular basis or people will stop checking in. I’ll finish with a shot of my studio companions, Kirby and Jimbo.