"LeMans" movie poster, done! Got back to it yesterday and made a big change to the sky. First I added a grey threatening sky to see if that helped...but we didn't like that so much, so I used acrylic to paint over that - and around all the flags and people up there - with the blue sky and eliminated the smoke plumes. Works better I think. 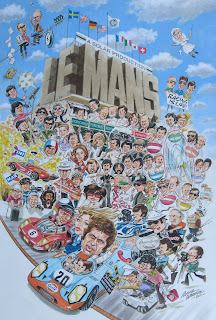 T-Shirt Design for my Aunt's Birthday 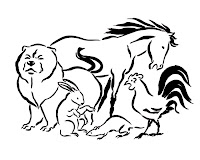 This is a little less playful than Chucks, but I had fun with the ink drawing.

My aunt wanted an Asian theme printed on red. The animals on the back represent the Chinese astrological signs of each of her 5 daughters.

I tried to keep it as simple as possible...

There are a lot of awesome characters at the gym. I am trying to draw more and the gym has been some pretty good inspiration so far! :)  I love people!! 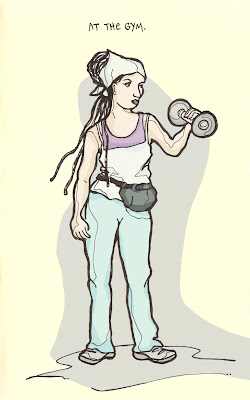 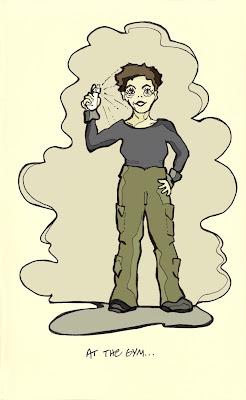 Cool article about Jerry in the West Chester Buzz:

If you want a copy of Big Red Machine for yourself:

This link also takes you to a radio interview.
Posted by Christina Wald at 4:08 PM 4 comments:

Well, it's pretty much done now, after a few days away from it. I thought it would have a white background, but I'm thinking now it needs a blue sky to bring out the elements at the top and also to diminish the black smoke a bit. It just looks like I started to paint something and stopped. 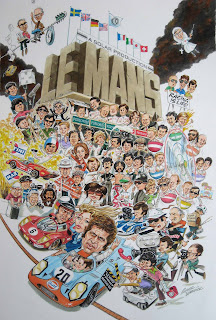 Our friends' dog Max had a birthday this week, so I made them this card. Max has a unique way of approaching a ball while playing fetch. He runs after it and then right before he gets to it, he has a beautiful, Olympics-worthy form of a pounce. I tried to capture that here.  – Stephanie Smith 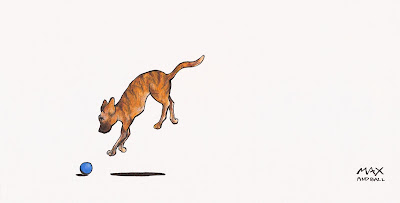 After about a day and a half of painting, here it is so far. Using liquid watercolors on cold press. Figured I would stay in "caricature mode" and do all the faces first. 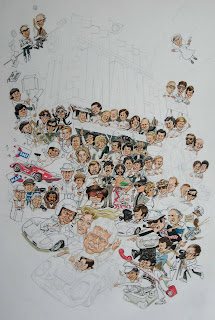 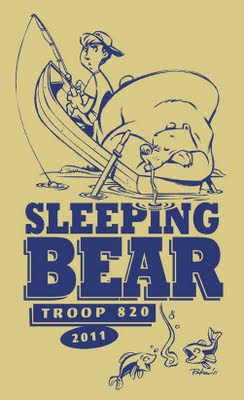 Since I can't show a lot of my recent commercial work, I thought I'd post the latest shirt design for my cousin's Boy Scout Troop. They're camping at Sleeping Bear Dunes in Michigan.
Here's the composite sketch before going to final: 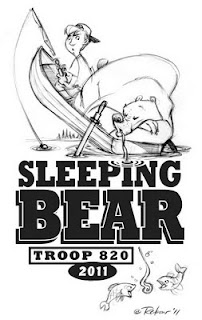 ..and an unused warm-up sketch: 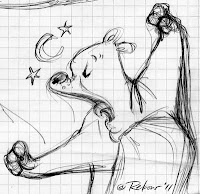 I left more sketches and a bit of added information here.
Posted by Chuck at 3:04 PM 6 comments:

The amazing Roger strikes again. How many pencil rough preceded this one?
Posted by jaydee at 12:43 PM No comments: 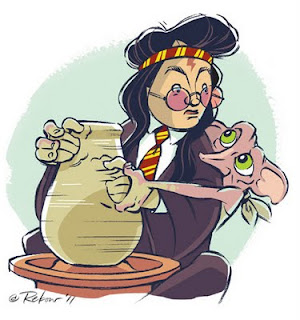 Never thought I'd post this, but with Potter-mania in full swing, I just buckled.
This was created for the spring issue of California Magazine. They have a running feature called Twisted Titles where they invite readers to riff on a famous book. Then an illustrator gets to pile on the irreverence some more. I was offered the chance to illustrate Hairy Potter—Hippie Ceramicist, and couldn't resist dragging the movie Ghost into the mud.
Here is another concept with Lord Voldemort as a tiki mug.
(I could have lived with that one too.) 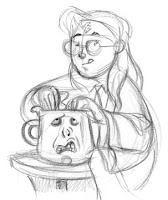 This is the final layout for a movie poster parody I've been working on for a few weeks, off and on. It's for the cult-classic racing movie "LeMans" from 1970, starring Steve McQueen. There's still a good bit of merchandising and nostalgia for it in the sportscar racing world, so I was asked to do this satirical look at the making of the movie by the license holder ( at least I think he is...lol ). Going for the Jack Davis madcap comedy look.
As usual it can't be simple, can it?! There are at least 68 characters in here - actors, drivers, crew - and many inside references to the movie and the making thereof. Fortunately there is a comprehensive book about the movie that had just about everyone's picture in it. Originally I planned to work everyone's last name into their caricature for easy ID purposes, but we scrapped that in favor of a key that will come with it.
Today was transferring ( via projector ) this to the board, and now I have to go back in and caricature each face more carefully than in this preliminary. Original size is 19 x 28, but it will probably be printed at 13 x 19. 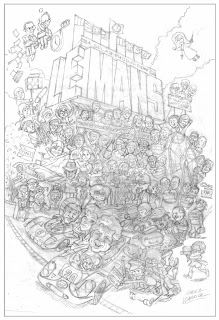 I have heard a lot of really good things about the writing workshops the Highlights Foundation has. Hopefully this illustration focused one will be as good.  I am not sure of pricing. I know scholarships are available for their writing workshops but if you are interested, contact them to find out. There is a limit of 30 attendees.
Here is the info:
The Theodor Seuss Geisel Award, the Coretta Scott King Award, the Caldecott Medal . . . if you're an illustrator, you know what these awards mean. They recognize illustrators at the top of their field, the height of their game. Illustrators who have mastered their own special brands of magic.

What if you could spend a weekend with those award winners? Learn new techniques from them? Explore a variety of media? Find out what they know about getting published and building a career? What if you could get to know them as mentors-and as friends?

You can. At the Highlights Foundation's Advanced Illustrators Workshop, September 1-5, 2011. Our award-winning faculty includes Floyd Cooper, Eric Rohmann, Melanie Hall, Suzanne Bloom, and Lindsay Barrett George. These picture-book pros will guide you through today's best techniques for children's illustration at the Highlights Foundation's new facility: The Barn at Boyds Mills. The latest addition to the homeplace of the Founders of Highlights for Children offers room to spread out and create art. During this intensive, hands-on learning adventure you'll sharpen your skills and explore exciting new techniques, all under the guidance of professional illustrators who have wowed readers with their work.

Besides illustration techniques, here are just a few of the topics you'll explore:

With five top illustrators as faculty, you may be surprised that this workshop is limited to 30 illustrators. The limited number of attendees makes this advanced workshop a lot like a graduate seminar. You and your work will receive personal attention and instruction in an intimate setting.

To secure your spot, or for more information, contact Jo Lloyd at 570-253-1192, e-mail jo.lloyd@highlightsfoundation.org, or request an application online.

Founders workshops take place near Honesdale, Pennsylvania, on a lovely farm at the edge of the Poconos, complete with front porch rockers, wireless technology, and the calm of the woods. This year, our new Barn at Boyds Mills, built from local wood and fieldstone, provides a serene space for illustrators to work.

Please feel free to share this e-mail with others who might have an interest or to include the information in blog posts or through other social networking forums.

Jerry Dowling's Fox Sports Ohio interview will be on tonight (7-7) before the Reds telecast at 7:30 or so.

Check it out and set your TiVOs!
You may recall the back story a couple weeks ago: http://cincyillustrators.blogspot.com/2011/06/illustrator-news-jerry-dowling-on-tv.html
Posted by Christina Wald at 6:03 PM 1 comment:

I was in Covington shooting reference photos and passed the CET building on the way home and snapped a picture. The mural based on Chris's painting is well on the way.

I feel sorry for the poor souls working on it today. It is 1000 degrees out!
Posted by Christina Wald at 3:33 PM 2 comments:

This looks so cool. From Manifest's site:

http://www.manifestgallery.org/studio/workshops/index.html
Posted by Christina Wald at 9:32 PM No comments: 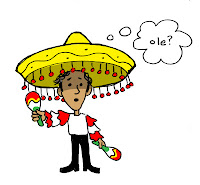 El Pueblo
4270 Hunt Road
Blue Ash, OH  45242
513-791-4405
Lunch this Wednesday is at El Pueblo this week. Apologies because the email had the parking directions for Arthur's in Hyde Park.
This restaurant is in Blue Ash, Plainfield Hunt Road exit off Ronald Reagan highway.
Just easing back into the swing of things after the holiday weekend...
Posted by Christina Wald at 4:25 PM No comments: