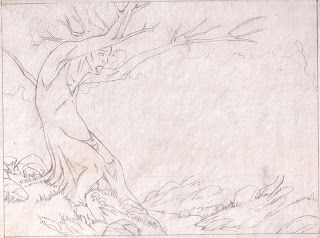 Hey, guys, here's the finished piece. Any comments before I send it off would be much appreciated. Crow quill on cold press bristol board.

Also, here is the final drawing for the second black and white image.
Posted by Justin D. Russell at 12:55 AM 2 comments: 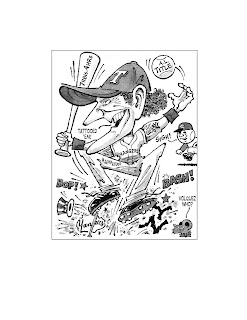 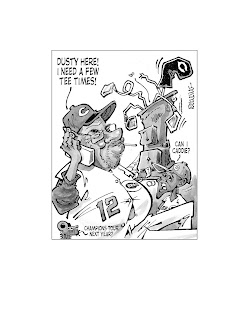 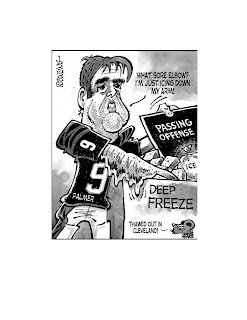 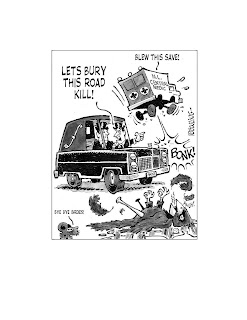 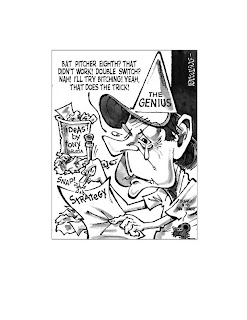 Hi guys- I just added another post to the Smartists Blog, it's called:
"Secrets you need to know about the client who asks you to do work for free"
I wrote it because I figured this could be helpful to everyone who gets offers like this and who'd like to know more about what's up with that.
Posted by Darcy V at 12:23 PM 2 comments:

If this is your first lunch, give me a heads up so we can look for you. Also ask the hostess where we (the illustrators lunch group) are seated.
Posted by Christina Wald at 4:57 AM No comments:

Bruce Chrislip gave me this to scan in last lunch at Washington Platform. It is the Youngstown Comic Association at Youngstown State University. Daryll Collins and Bruce are both in the picture. Can you find them?
The yearbook also has pictures of young Ed O'Neal ( Married With Children) who was in the school plays there while going there.
Posted by Christina Wald at 8:54 PM 4 comments:

Email ThisBlogThis!Share to TwitterShare to FacebookShare to Pinterest
Labels: art school, blast from the past, bruce Chrislip, Daryll Collins

Jim Effler: 3 Heads are Better than One 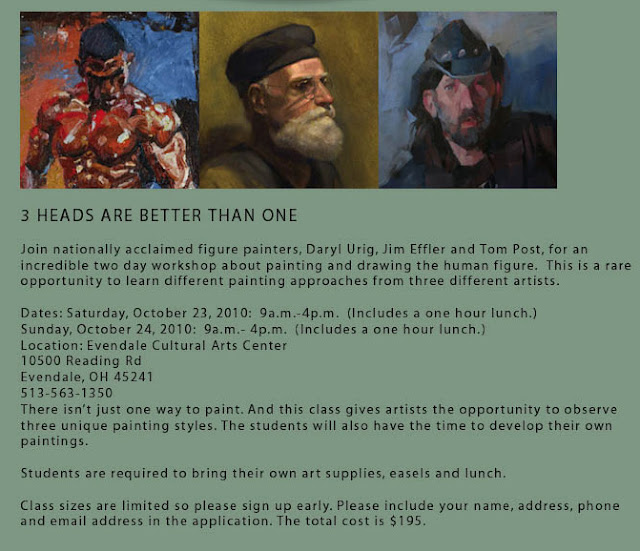 Daryl Urig, Jim Effler, and Tom Post are conducting a 2 day workshop about painting and drawing the human figure at the Evendale Cultural Arts Center October 23rd and 24th. Lest we take ourselves too seriously.
Posted by Brian Hagen at 3:38 PM 4 comments:

An Evening With Matt Groening-Review

Here is a recap of the Matt Groening talk with Tom Gammill. Tom is also a cartoonist and writer for the Simpsons. I recognized his voice from the Simpsons DVD commentaries.

Tom also does funny films with cartoonists on You Tube called "Learn to Draw". Here is one with Jim Borgman. They showed one with Matt, but I cannot find a link to it.

The talk touched on the creation of the Simpsons, Life in Hell and Futurama. It was interesting but I would have liked more talk about the animation process with maybe some concept sketches and animatics. Unfortunately, I think that part of the creative is not really the phase that Matt is involved with. It is more in the realm of the directors and artists at the studios. Here is a blog entry I found with a good overview of the talk (from freep.com).

Afterward, there was time left open for questions, which took a strangely fannish turn. (Someone asked for a lock of Matt's hair-creepy...)

Overall it was an enjoyable evening. We also saw an exhibit on the campus of Billy Ireland's Columbus Dispatch work. Really facinating stuff-especially the politial battles and issues affecting Ohio in early 20th century.

We were not able to see the George Herriman Krazy Kat exhibit or the R. Crumb Genesis exhibit, but plan to make it up to see them at a later date.

In other animaton lecture news, Chuck went to see Disney artist Mark Henn Talk at Wombat Gallery. He promises a report ;)
Posted by Christina Wald at 10:23 AM 5 comments:

The square is a little torn up right now. Parking is probably best on Markbreit.

If this is your first lunch, give me a heads up so we can look for you. Also ask the hostess where we (the illustrators lunch group) are seated.
Posted by Christina Wald at 9:49 AM No comments: 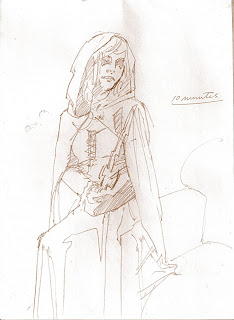 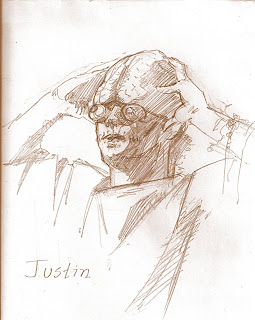 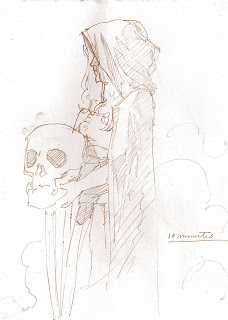 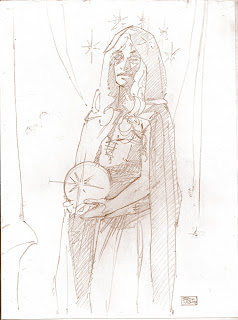 Here are some selections from Dr. Sketchy's, October edition :P The latter half was more inspiring than the first, but it was all pretty sweet :)
Posted by Justin D. Russell at 8:25 PM 4 comments: 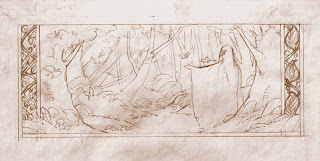 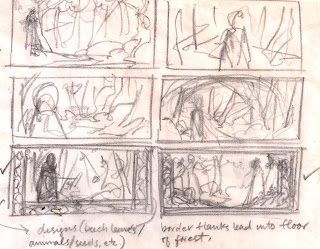 Hey, guys, here's some current process work I've been doing for a new project. The first image is the final sketch before reference.
Posted by Justin D. Russell at 2:28 PM 8 comments:

An Evening with Matt Groening at Wexner Center

I just found out about this:

Creator of The Simpsons, Futurama, and Life in Hell, Matt Groening is leaving an indelible mark on the popular culture of the United States and many other corners of the world.


This evening he'll discuss his career in comics and television with Tom Gammill, an acclaimed writer/producer/cartoonist, who has written for such programs as Seinfeld, Late Night with David Letterman, and The Simpsons. This conversation with Groening complements the talk by Art Spiegelman, the 2010–11 Wexner Residency Award artist in media arts, held the following afternoon.

Here is info to get to the Wexner Center in Columbus:
http://www.wexarts.org/info/visit/
Posted by Christina Wald at 12:20 PM 3 comments:

Local illustrator David Mack has been working on the animations for the Showtime Dexter Series.

Here are the artist bios: http://www.sho.com/site/dexter/webisodes_artists.do

Here are the webisodes. Check them out; they are really cool! I like the idea of a slightly animated graphic novel. It is a good way to develop additional content for the show.

If this is your first lunch, give me a heads up so we can look for you. Also ask the hostess where we (the illustrators lunch group) are seated.
Posted by Christina Wald at 8:30 AM No comments:

Local Films Wednesday at the Esquire

This is my poster for a Cincinnati-made film making its premiere in the local short film section of the Cincinnati Film Festival.

I am assured by the writer, Aaron Maas, that this promotional poster will be available at the show. The movies start at 6:30 p.m. at the Esquire Theater in Clifton.
Posted by Brian Hagen at 2:13 PM 5 comments:

This year's Spectrum Fantastic Art book will be out soon and several local illustrators have work in this year's collection.

Thje publisher just put out this teaser video of the proof. Check out the inside cover art!

The deadline for the next edition, Spectrum 18 will be in January...
Posted by Christina Wald at 8:43 AM 8 comments:

OK, I am not sure what is going on with google calendar. Is it showing up for anyone else?

Things have been quiet. What are people working on?

I am looking for people to model for the illustrations in my next book. Anyone interested? It is a biography taking place mostly in the early 1900s.
Posted by Christina Wald at 2:25 PM 3 comments:

Pictures from Books by the Banks

﻿ ﻿ Books By the Banks was great this year. Lots of amazing illustrators and writers. I wish I had taken more pictures but traffic was pretty heavy all day.

Mary Kay Carson and I both have bat books and decorated our table on a total bat theme. We will be at Blue Manatee on the 23rd and Bat Fest the 30th, so this was a kick off of sorts. 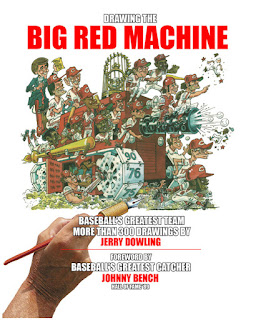 From Jerry: An old Enquirer sports writer Mike Dodd, now at USAT and here to cover the Reds playoffs, did a review.
Dowling to publish baseball cartoon collection

Former Cincinnati Enquirer editorial cartoonist Jerry Dowling is putting together a book of his favorite illustrations and cartoons about the Cincinnati Reds. The veteran cartoonist did not always portray his subjects in a flattering light. When Marge Schott bought the Reds in the early 1980s, he drew the new owner with a super-wide grin and [...] 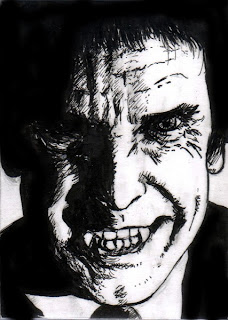 Matthew Parmenter, local freelance illustrator, is going to be having a Halloween art show.

free to the public 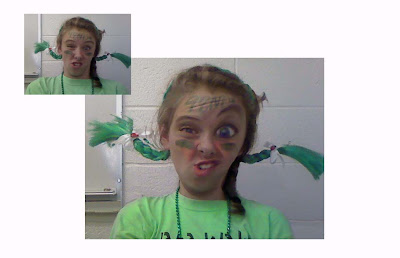 Hi guys- I was just messing around last night, wanting to try something that's new for me and this is what happened. It appropriate because she likes making these weird faces in photos so- hey!
Posted by Darcy V at 9:05 AM 2 comments:

Great little documentary on the history of illustration for the New York Times Op Ed page:
http://www.nytimes.com/interactive/2010/09/25/opinion/opedat40-illustration.html?emc=eta1
Posted by Christina Wald at 6:45 AM 1 comment: