Opening reception at The Flying Cat

I will be having my works of mixed media art on display for an opening reception this Friday April 1st at The Flying Cat in Covington, Ky. The opening reception runs from 6pm to 10pm. For more room to mingle and hang out, they will be opening the back patio for drinks and snackaroos. I have several new pieces that went into this show. Some of which you might have seen me post. Come check them out in person and say hi, and to all the awesome folks at The Flying Cat.

Hope to see ya there.

Link for The Flying Cat

This show caught my eye : http://www.westonartgallery.com/ex2.php?exDate=2011-03&exType=current&


For the exhibition Narrative Figuration, curator Daniel Brown has assembled an exceptionally talented cast of artists that shares a passion for painting and the human figure: Robert Anderson, Daniel O’Connor, Tim Parsley, Emil Robinson and Tina Tammaro. About their varying approaches to a common theme Brown states, "Working in a range of styles from the realist to the formalist to expressionist, all create narrative genre scenes, with the human figure central to them." They form a cohesive group of friends and colleagues who have the shared experience of attending the University of Cincinnati’s College of Design, Architecture, Art and Planning. Brown cites varied influences among the artists that span the masters of Dutch portraiture such as Rembrandt, Van Dyck and Vermeer to contemporary artists such as Giacometti, de Kooning, Bacon, Freud and Fischl. 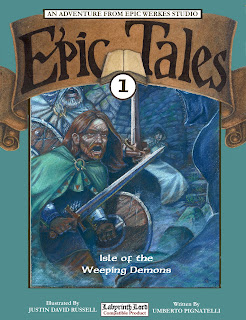 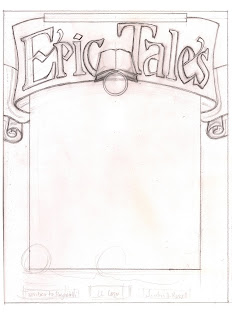 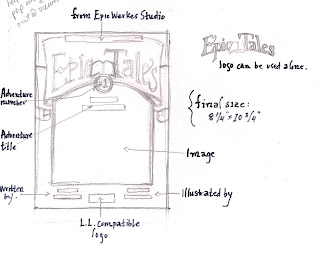 Hello, all :) I'm pleased to present to you the final design for the 'Epic Tales' adventure series for Labyrinth Lord. A friend and I are co-conspiratours in a project to be released through my company, Epic Werkes Studio. These adventures will be the forerunner to my own, personal, project. Each cover will feature the same layout, but the colour background will change depending on the image. The images for each adventure will be free to break the bottom and sides of the framed space. The circular region before the book will feature the number of each adventure in the series. My friend is the writer, I am the designer, illustratour, and layout person. So, I am in charge of figuring out the consistent format each adventure will follow. The logo (with the book, but not the banner) will be able to be used, separately, to advertise the product. In some cases, the banner will be present in ads. Currently, the adventure is already written and in the editing process. I have cleaned up the text and made a few changes to the serifs and kerned some of the lettering. I have also transferred the banner and logo and begun painting them. Then, I will set up the layout for the book in Indesign. These are intended to be pdfs, and will be able to be downloaded from RPGNow. I am designing a full front and back cover so that they may be printed in their entirety. This way I can take physical copies to conventions and hand out as promos to gaming stores... Plus, I am not a fan of pdfs. I hate reading things online :P The tentative release date is the end of the Summer. There is lots of work to be done :) I've also included a file of the cover mock-up. It's rough, but it should give you guys an idea of the final design, with the painted logo in place. The logo is in watercolour. The image is an old pic I pulled from some work I did a while ago. It serves only to fill the space and give an glimpse of the final layout with a 'real' image in place.
Posted by Justin D. Russell at 1:58 PM 5 comments:


Learn basic watercolor principles and techniques including values and color theory. Complete art with step by step demonstrations and personal instruction. Mark is known for his encouragement and for being able to bring out the best in his students. 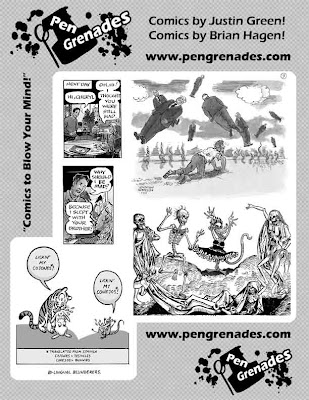 I'm going to SPACE (Small Press and Alternative Comic Expo) in Columbus this weekend to promote my webcomic with Justin Green, "Pen Grenades."

This is, roughly, the promotional flier I plan to pass out. The motto I made up is terrible. "Comics to Blow Your Mind"? Really?

Does anyone have a better suggestion?

(You should be able to click on the flier to see it at full-size.)
Posted by Brian Hagen at 7:10 PM 4 comments: 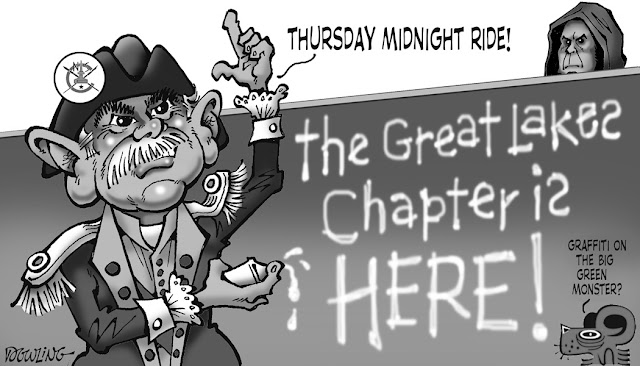 From Jerry: The Great Lakes Chapter has bought a full page ad in this year's program for the National Cartoonists Society's Reuben Award Convention in Boston. About a dozen of us are participating with a portion of the ad. This is mine. I wanted to tie in my own style and sports connection, as well as the famous Green Monster wall at Fenway Park. The little hooded guy at the top right is Patriot's coach Bill Belichick, known for spying. Unfortunately, we couldn't use color, hence the Dirty Rat comment. I became Jerry Revere.
Posted by Christina Wald at 9:48 AM 4 comments: 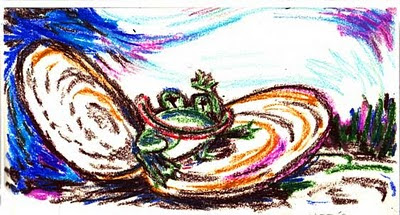 Once upon a time, I decided to treat this blog as a place to show my work to fellow artists. Not the work that was slick and promotion-packet-ready, but the sloppy, fun, experimental stuff.

I've been slack on this goal. So here -  drawn with an old $7 set of oil pastels which I've never been able to control - is Froggie McClamworthy.
Posted by Brian Hagen at 12:36 PM 4 comments: 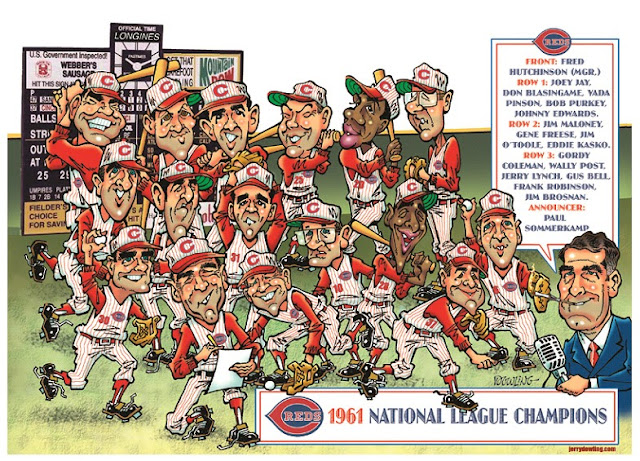 From Jerry: This is the third of the drawings I've done annually for the Reds Opening day Findlay Market parade. This will be on t-shirts, and a 4 x 6 foot board attached to a float. The board will eventually wind up in the Reds Hall of Fame.
Posted by Christina Wald at 10:41 PM 4 comments:

Kids Do the Darndest Things! 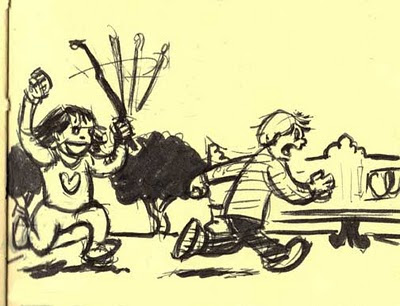 Sketchbook: from a park in Mexico City.

The girl had been beating bushes with a stick for five minutes. When this finally bored her, she went after a little boy.

As in the U.S., so in Mexico: without good parenting, children are sadistic barbarians.  And they do the darndest things!
Posted by Brian Hagen at 5:52 PM No comments:

I'm building some material for some projects I am working on. I wonder if some of you might be able to tell me which printing companies (local) are reputable and reasonably priced?

I had advanced a query to several people whilst at Teller's, not long ago. I'm in the process of building a product line of adventure games. As of now, I have more questions than I do answers, though I feel I have a firm direction in which to go. If any of you feel you may be able to shed some light on this for me, please do.

I am also going to approach some gaming contacts I have made over the years, and see where that takes me. Anyone with experience in this area, please feel free to offer advice. At the moment, I am not not comfortable divulging too much information, but I can give enough to get some answers to much needed questions.

Thanks and many regards,

Due to a cruel blow that has recently been dealt to me I am in the process of completely breaking down my studio. Then I'll have to set it up again somewhere else! And I'm kind of amazed at some of the stuff I've found. I'll try and post when my heart and frame of mind will allow.
Here are a couple comic strips I did for fun called "Uncle D's Cartoon Corner".
Hope you like 'em. Wish I could make money on this stuff!
Posted by Daryll Collins at 10:55 AM 16 comments:

Article About Dennis Porter in the Dayton Daily News 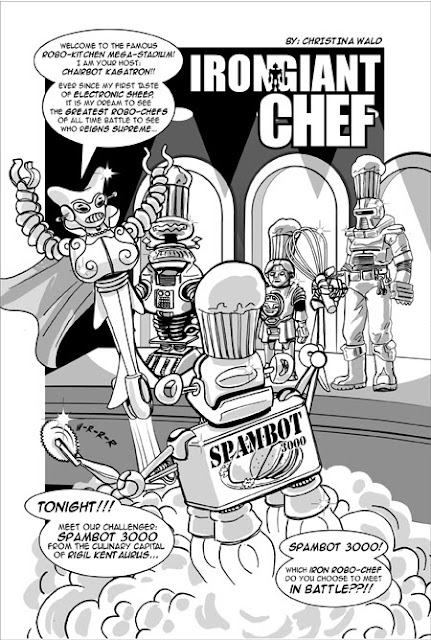 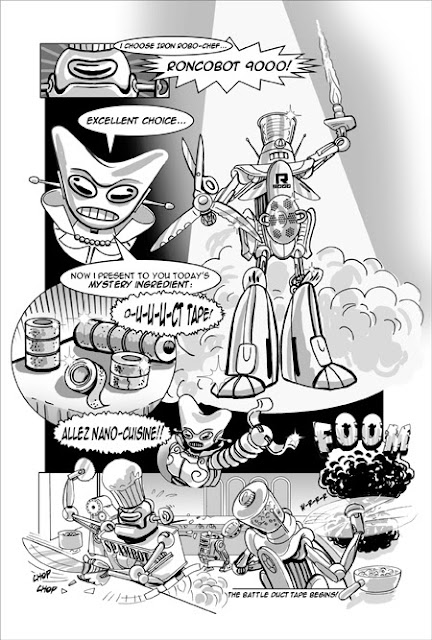 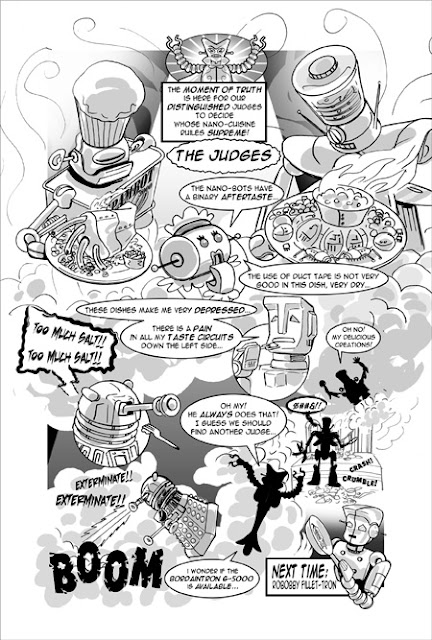 This is a mini comic I did for a friend's comic anthology called Slam Bang. The theme is robots and I could not resist the topic. I do these to relax when I am doing a LOT of painting. It is like a palette cleanser.

The small press comic show SPACE is in a couple weeks and I hope to make it up there for a day.
Posted by Christina Wald at 8:21 PM 9 comments:

This is Jim's 16th Bockfest poster!

Jim will be there from 6-10 Friday March 4th and again on Saturday and Sunday in the afternoon.

Bockfest Hall is at 1619 Moore Street in OTR. 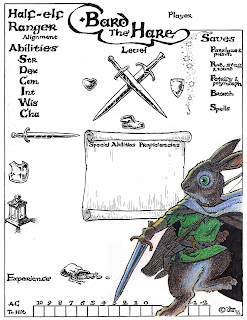 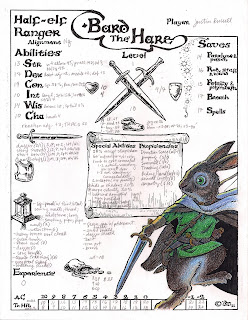 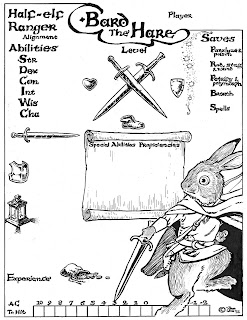 Here's a character sheet for a game I'm going to be playing in. This is a prototype, and I inked EVERYTHING. The type's a little rough, but it was a good test to see how I could potentially lay out my own character sheets for sale with a game system a friend and I are going to publish some adventures for, through Epic Werkes.The big thing for me with this project was to be able to signify, with images, things that are normally represented with text. I also included the alternate, colour version, and the sheet after I started using it.
Posted by Justin D. Russell at 8:47 AM 5 comments:

Hi folks!
An painter friend of mine needs someone to design a new logo for a high school, and then he will be painting/airbrushing it on the gymnasium wall. They are the Beallsville Blue Devils, and they've been using Duke's logo up to now, but they would like to have their own blue devil designed to be used on everything.
If I had any spare time I'd do it! Plus I know there are better logo designers than me here.
Simple lines....blue, white, and maybe black. There may be a little bit of reimbursement in it from the school district, but this is a small school in Eastern Ohio.
Contact: Scott Hagan
e-mail: barnartist@dhwireless.net
Posted by Roger Warrick at 3:13 AM 1 comment: 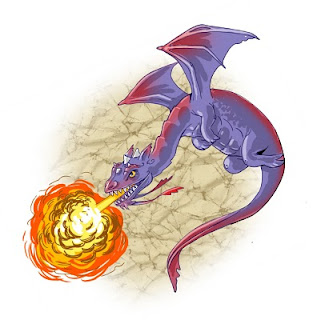 Here is a quick little colorized ink sketch I did for my nephew for his birthday card (it was quicker to draw than a knight-which he is into now). I would probably do some things different, but I only spent an hour or so on it and have little time.

Although, to truly make a 9 year old like it, it would have been two battling dragons with a lot of blood. His mom would not let him have it though... Daryll is right about most cards for boys having a high lame factor, which is why I made one.
Posted by Christina Wald at 7:19 PM 5 comments:

On March 2nd, we will have lunch at Grand Ole Pub in West Chester since we were snowed out last time.
Jerry Dowling did a cool collection of caricatures to decorate the restaurant.

Hope to see you all there!
Posted by Christina Wald at 7:05 PM No comments: