In case you all didn't already see this posted anywhere, please visit Daniel Caylor's blog "On Animation" and see his post of the complete Famous Artist Course booklets. If you're not familiar, it's an artists course from the '60s , founded by Al Dorne and Normal Rockwell. It's 24 lesson booklets, downloadable as free PDFs of great, classic, illustration techniques and tips. It covers everything from the basics and artist materials, to composition, form and painting techniques. I haven't read them all, but for anyone who still considers themselves a student, they're sure to be a fascinating read! And we can all probably pick up a gem or two from lessons created in part by Norman Rockwell and Al Dorne!

Get 'em while they're hot! 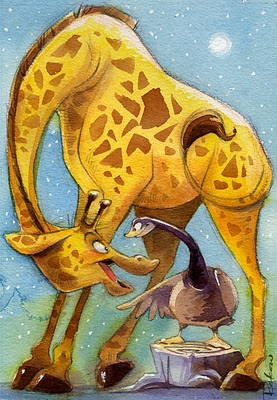 This watercolor piece was commissioned to be simply hung on a wall —a real rarity for me. The only stipulation was that it should feature a giraffe, so I snuck the little fella in the background (that's him behind the goose).
Posted by Chuck at 11:00 PM 7 comments:

I'm sure alot of you were wondering at the Christmas party what in fact was in that Giant Blue Box of Doom.
Holy Hot Pants Batman! I was expecting a garden gnome or used pair of boxer shorts so when I opened Big Blue with my wife
and family today I was blow away by my Mr Collins swag extravaganza! In fact I have to get back because they are yelling at me to come back down for dessert but I just wanted to say you DA MAN DARYLL! There is no way even if I had the time I could tell you all the things in the box with such nicknacks as a Ford Mirror/Brush and Baseball snow globe mouse but here are some picks of my Booty. The highlights for me were: two D. Collins originals, a snotty Christmas card, Ren and Stimpy Comic, Zombie covers Book as well as a Prince of Persia Graphic novel-SCORE! So to all you that passed it up--- SUCKERS-- to Daryll a huge thank you and to all the other good little illustrators on Christmas eve.... God Bless all of us all, Everyone!
Posted by Woodrow J Hinton III at 4:07 PM 5 comments:

I rarely make time to produce illustrated Christmas Cards for myself, but I've done them for others in the past. Here are two I created for The Merten Printing Company way back in the mid-nineties. 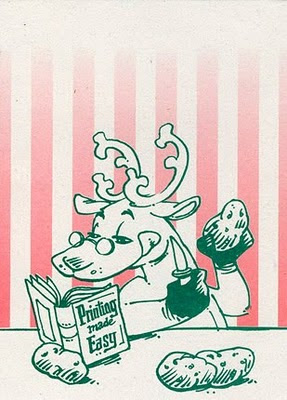 The accordian-fold reindeer card was created in 1995. Jim Borgman had been designing Merten's cards in years prior, and I really felt the pressure. Knowing I couldn't compete in execution, I went for a funny concept, and pulled it off as best I could. The words "Happy Holidays" were authentically created by carving potatoes and printing them on paper before scanning them. I had fun exploring every possible way of messing up a potato print and drawing the reindeer to correspond to each letterform. Note the nod to David Carson, who's fame was cresting at that time.
Two years later, I designed the elf card below, and wisely decided to go bolder with the color. 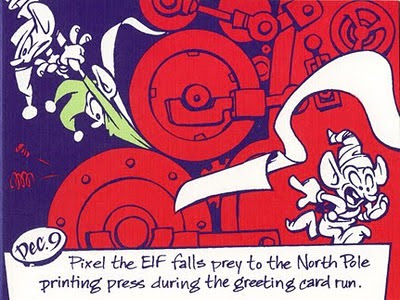 The elf was originally named Skippy the elf (after president, Skip Merten) to the apparent delight of the pressmen and production staff.
Skip had me change it to "Pixel" anyway. :-D
These were a lot of fun and I'm posting them as a tribute to Skip, who continually gives and gives and gives to this city and has taught me more about printing than any teacher or mentor ever could.
Cheers!

To start off, it was great to see so many of you at the Christmas party last night. What a great turn-out! The only bad thing about it is that I really didn't get to talk to as many people as I would have liked. Ryan Ostrander, his wife and new baby were sitting right behind me and I didn't realise it until they were getting ready to leave! I did get a chance to meet Linda and Al's baby girl and to talk to Ursula Roma, who I've not visited with in years. Proud to be a part of such a talented and great group! Hat's off to Christina for setting up the party!
Now on to the business at hand... As promised here are my two Christmas cards for this year...
Here is the one sent to older relatives, families with young children, etc. 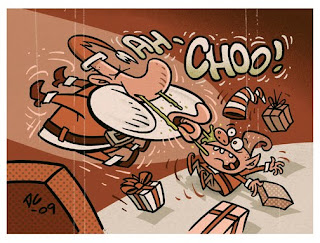 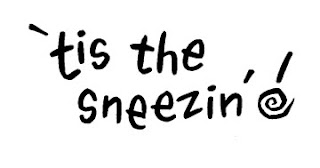 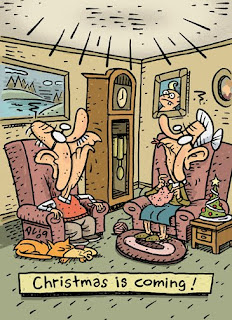 Posted by Daryll Collins at 9:00 AM 6 comments: 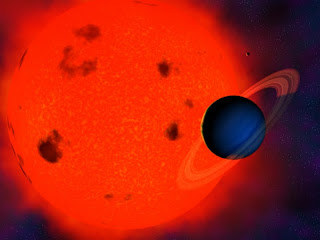 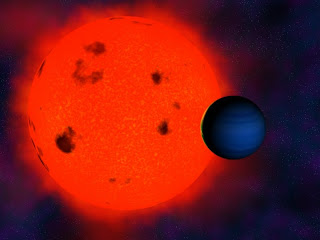 Based on a piece by David Aguilar (CfA) published on Sky and Telescope's web site. This shows the planet transiting the red dwarf which it orbits. My version was created in 3DS Max except for the planet texture which was done in PhotoShop. Otherwise all of the other textures are procedurals which makes for very fast renders.
Posted by T.O.M. at 9:58 AM 1 comment:

Bugs From A to Z 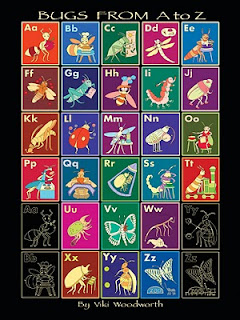 I finished all the bugs and put them together in a poster. In my "not looking ahead" brain, I never planned to put them all together, so some groups are heavy in one color range, still, it's done. I'm happy. What more do you need...
Posted by viki at 2:05 PM 3 comments: 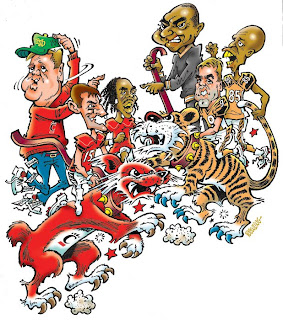 Book Signing: Jerry will be at Joseph Beth in Rookwood Pavilion on January 12th at 7pm to sign his Bengals book. Hope to see you there!


Jerry's CityBeat Cover: This is the current issue. The magazine cropped it quite a bit so this is the full image.

Gift Caricature: This is one of Jerry's latest. 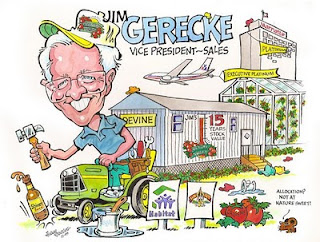 Posted by Christina Wald at 9:02 AM 2 comments: 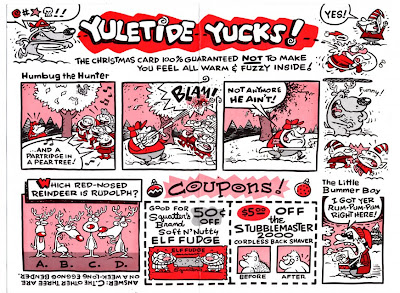 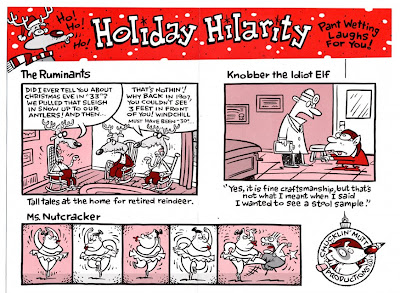 I've done my own personal Christmas card for over 25 years now. It's always a problem coming up with a gag or gags that will not cause older relatives to pass out or to ban me from their homes, yet funny/not lame for my colleagues and friends. Above are a few of my more ambitious creations from years ago. I don't have that kind of time, energy or ambition to do ones like that these days.
Below are a few concepts that I've considered over the years but due to "good taste", decided that Aunt Thelma and Uncle Carl just wouldn't understand. I think these unused ideas may find their way to that island with the misfit toys! 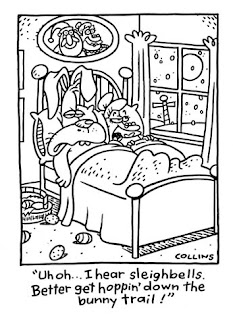 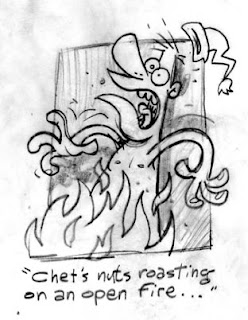 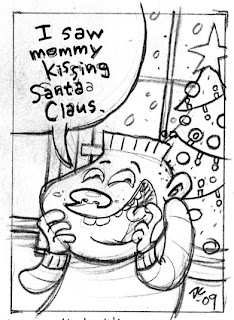 INSIDE: "But that ain't nothin'
compared to what I saw her doing
with the mailman!"
This year I was having a real problem coming up with anything! I finally came up with an idea that was ok. Funny enough and not candy-assed and figured,"It'll do." But then, like a lightning bolt from Valhallah, came the idea for this year's card. Only problem... it's a bit foul. So for the first time in history I will be sending two separate cards.
I'll post both after the holidays.
Posted by Daryll Collins at 8:21 AM 11 comments:

Usually around the holidays, people end up doing their own personal Christmas cards, or doodling Santas and elves on scraps of paper during lunch. Post your holiday card illustrations, or any holiday drawings you've done while the cookies were baking! Or if you read a lot of illustrator blogs and notice some other great artists posting their holiday stuff, link to it so we can all be inspired as well.

I've posted a few images of recent holiday drawings. The first two were my first all-digital, Cintiq-drawn illustrations. One for my work and one just for kicks. The last is a holiday card idea, but we'll see if I can round up the time to make any of them. Can't wait to see your follow-up posts! 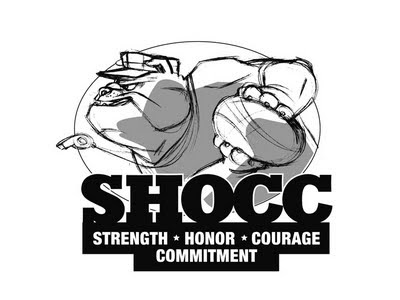 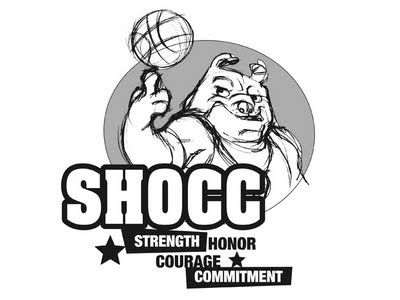 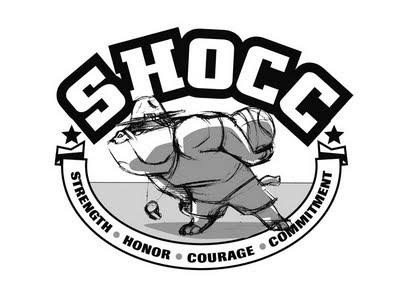 A few logo concepts for a new client who trains basketball players. Obviously these are sketches, so there will be plenty of finessing. It's been a really fun project, and I hope it continues to go as well as it has thus far. I'll have a lot more to tell about it later. All I can say right now is that the client is pleased.
Posted by Chuck at 5:41 PM 5 comments:

Howdy Folks,
Here are two of my sketches from the last Dr. Sketchy session. It was quite fun but very cold. I don't know how the models survived it.
Dave
Posted by Anonymous at 4:24 PM 2 comments:

I've never attended a Dr. Sketchy's session, but I thought I'd answer the call to post some figures. I did this male figure in pastel several weeks ago at Manifest Studios. 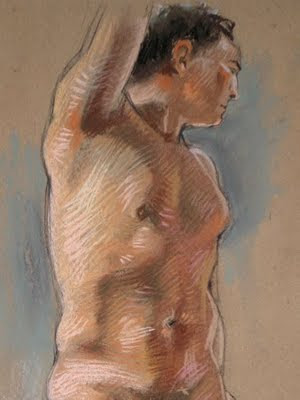 There's more to see at my figure drawing blog. Visitors are always welcome.
Posted by Chuck at 10:20 AM 5 comments: 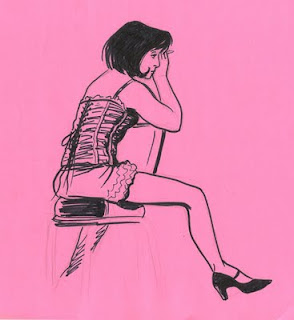 Here are a couple of my favorite sketches from Thursdays' Dr. Sketchy's drawing session. It was a lot of fun with plenty hot cider and coffee since it was absolutely FREEZING out.

The venue is an old church in Covington's Main Strauss area and is a lovely place to sketch with the fabulous stained glass windows and interesting spaces.

I am still figuring out the ideal mix of drawing materials. I am enjoying the ink for now.

Next month's costume theme is Russian Cold War from what I understand. Hopefully in a James Bond way. Too bad there is not a bar here like the Safe House in Milwaukee.


I am pushing for a whole Lord of the Rings theme with Arwen, Aragorn, etc. (Brennan, hint hint?)I am sad I missed the session where the models dressed as fairies.

By the way, I hope to see other people post what they are doing for Christmas cards. Show them off! 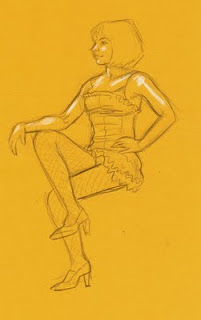 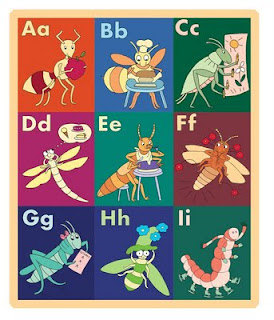 I've finished my alphabet series that I've been bringing to lunch. Here are the first nine letters.
Haven't put the others in blocks yet. Had a great time with it. The paintbucket tool and I are now an item-a little weird, I know, but works.
Posted by viki at 12:22 AM 3 comments: 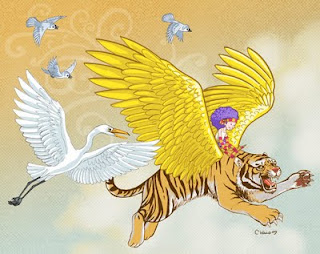 Here is my Christmas card for this year. It got even weirder at one point but I had to edit when it was not working. It was like, well, wrestling with a flying tiger... Humorously, it was probably the most "Christmasy" element in the design. I may use what I chopped out for something else.

I am doing a small print run of postcards but will mostly send an e-version.

What are all of you doing? Show it off! Enquiring minds want to know.
Posted by Christina Wald at 1:06 AM 6 comments: