Jo Ann Berger and Nora Salazar have an opening this Friday at Park + Vine at 6 pm.

Several weeks ago, Ursula Roma came the the illustrators lunch and had a bunch of us test out a fancy set of Winsor & Newton markers she was doing a review of.

Here are some of the images in the article. It is in the January/February issue of Artist Magazine where you can read the details!


We used to bring sketchbooks to lunch to draw; maybe we should re-institute the tradition!

Posted by Christina Wald at 1:28 PM No comments:

C.F. Payne is one of the most talented and prolific illustrators of our generation. He has just completed over 80 illustrations for The Adventures of Tom Sawyer and around 60 drawings and paintings will be on display for this Friday's Opening at The Flats Art Gallery. 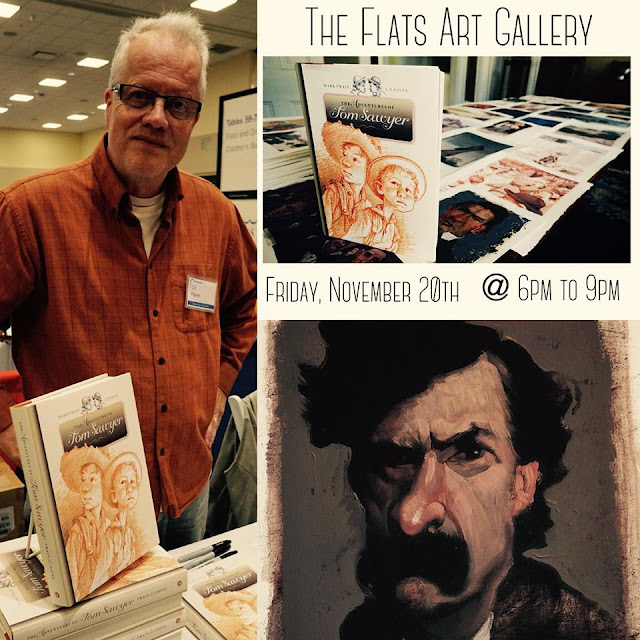 Posted by Woodrow J Hinton III at 2:40 PM No comments:

Sketch Outing at Mother of God Church in Covington

Vanessa, Jeb, Robin and I met last Wednesday afternoon to sketch the Mother of God Catholic Church in Covington.

It was a little daunting at first because we were so close; it was a bit of a forced perspective. We wanted to be in the sun though. This was the type of fall day that gets chilly the second you are not in direct sun.

It is always so interesting to see how each person sketching handles the composition.


We sketched until it got too cold and then finished the color portion at home.

The church bells tolled frequently as we drew which prompted interesting discussion of recorded over hand rung.

Here are the final results!

Posted by Christina Wald at 6:04 PM No comments: 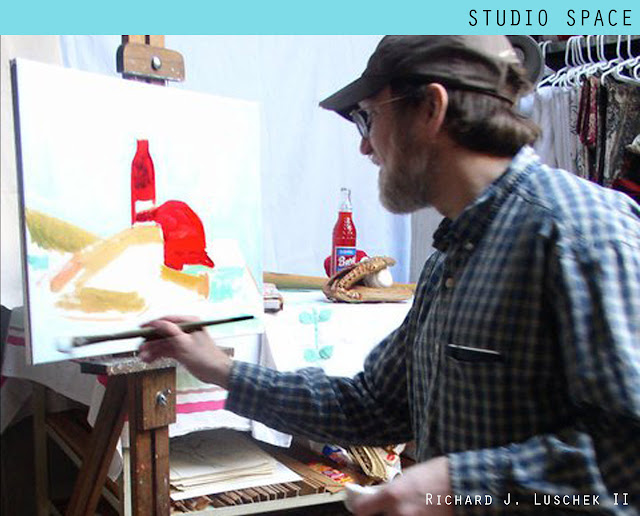 After graduating from the University of Cincinnati with Bachelor’s degrees in Biology and Fine Arts, Richard Luschek was fortunate enough to study at the Paul Ingbretson Studio of Drawing and Painting located in Manchester, New Hampshire. Mr. Ingbretson, a modern master of the Boston School tradition, was a student of the late R. H. Ives Gammell.
Mr. Luschek has taught for the Art Academy of Cincinnati, the University of Cincinnati, as well as privately in his studio. He has worked as a scenic artist at the Cincinnati Playhouse in the Park and was also trained as a cabinetmaker, a skill he often uses to construct his own frames, build studio furniture and work constantly to fix his 100 year old house. One of his portraits is in the permanent collection of the Cincinnati Art Museum and in private collections on the East Coast and in Cincinnati.   A Signature Member of the Cincinnati Art Club and one of the artists in the Greenacres Artist Guild.


Location: I am lucky enough to have two work spaces. The first is in Eden Park near the Krohn Conservatory which I use for my easel painting. The second space where I do most of my illustration is in the basement of my home in Clifton Gaslight.
Website: http://www.richardluschek.com/  I hesitate to post this as I have someone putting together a much cooler website. Coming soon.
My blogs: http://richardluschek.blogspot.com/
http://luschekillustrationblog.blogspot.com/

On the Drawing Table: I am finishing up the illustrations for a children’s book who will be publishing sometime soon. I am always working on the next Hârn publication. In the studio I have a few still lifes I still arranging and setting up.
Coming out soon:
The book “I’m In Charge” by Henry Vogel for which I did the cover and all the interior art. 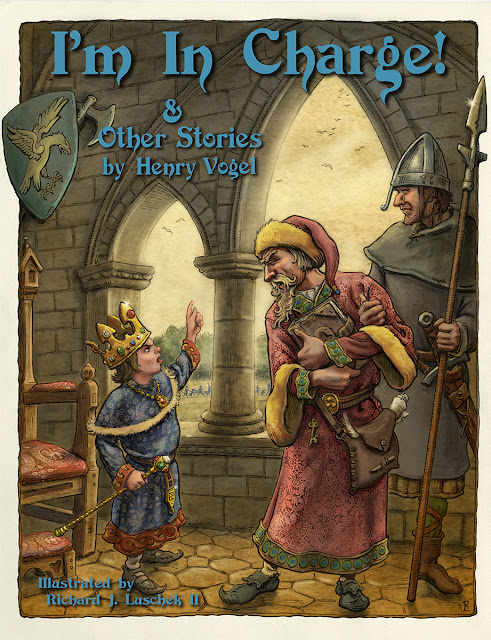 How did you get your start as a professional artist?
After graduating from U.C. I worked as a scenic artist at the Cincinnati Playhouse in the Park. I left to study painting in New Hampshire. When I returned I took some work to local galleries and started selling my paintings.
Illustration wise, I did some work for a gamer in Sweden who was writing fanon for a role playing game I enjoyed called Hârn. Next thing I knew I was the full time illustrator for the company that published that game.

Describe your work. I kind of feel like I have two jobs. One is doing traditional easel pictures: usually, still life, portrait, or landscape painting. I do this work exclusively from life, painting in oil at my Eden Park Studio working under north facing skylights. I tend to paint mostly still lifes. My recent work has been more about nostalgia; based on memories from my childhood. I really enjoy doing diptychs or multiple panels that tell a story together and interact with each other.

My illustration work has mostly been for fantasy Role-playing games. I do sketches, from photo references which I ink by hand. If they need to be colored I usually do so in Photoshop.

Tell about your workspace.
My Eden Park studio has been used as such for over 100 years. Originally built as a law office in the 1860s, an artist named Myer Able moved in a used it as a studio till he died in the late 40’s. One of his students Jane Cone Becker moved in and worked there till the 80’s. During that time the building was moved from its location near Christ hospital to its current spot on St. Paul Place. The current owners were using it for storage till I moved in about 8 years ago.
I keep a pretty tidy painting studio. All my still life props and fabrics are organized so I can easily choose what I need. 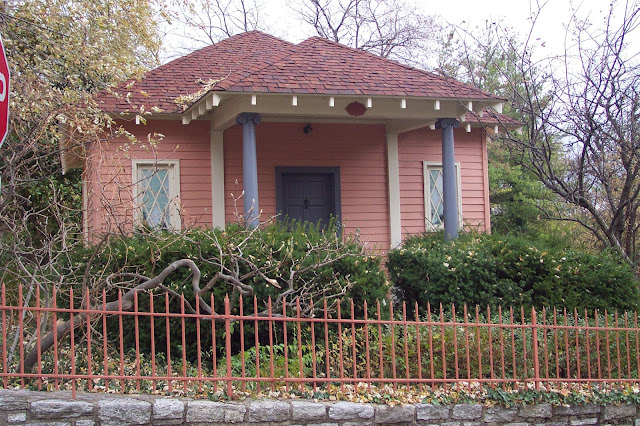 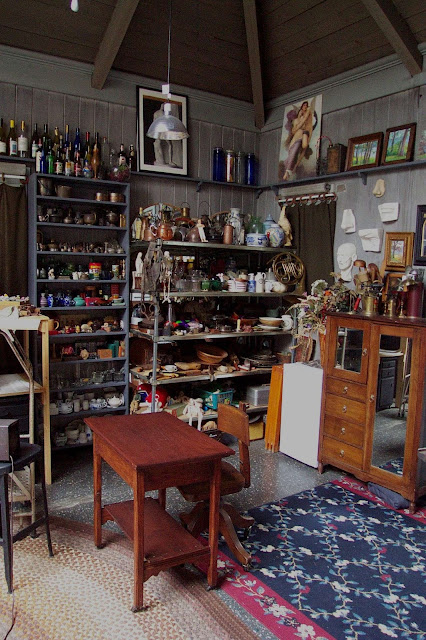 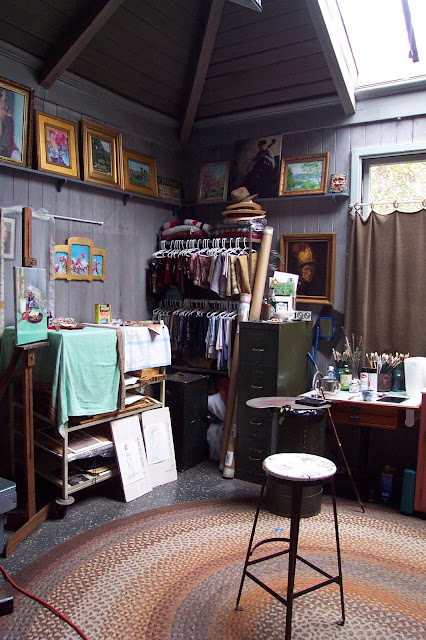 My studio at my home in Clifton is in a corner of the basement near some windows. It tends to get a bit messier, but I usually end each big job with clean up session.
As I was having issues with my back and shoulders after long hours illustrating, I build myself a stand up desk for my computer and Cintique. I could have just raised my desk up the correct height, but I am a bit of a ‘fancy pants. I found an old 1860s pump organ, and used it to build my desk. I have the keyboard at the perfect height, the monitors are adjustable and I have a high chair so I can sit if I get tired. Under the monitor I added a drawing board that can be pulled out for working on small drawings. If I were to do it over again I would make the desk a bit wider and deeper. 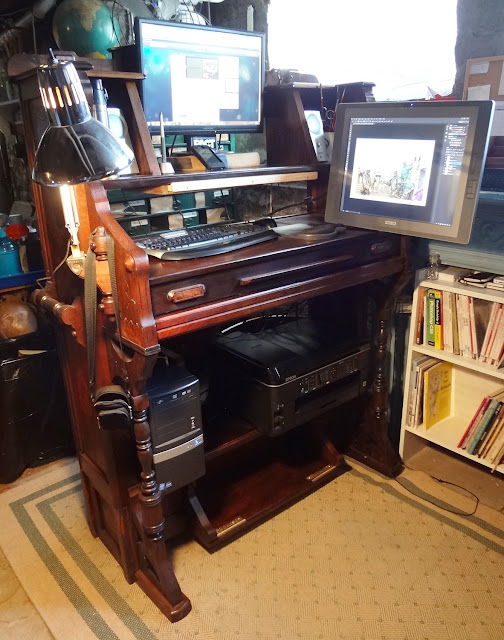 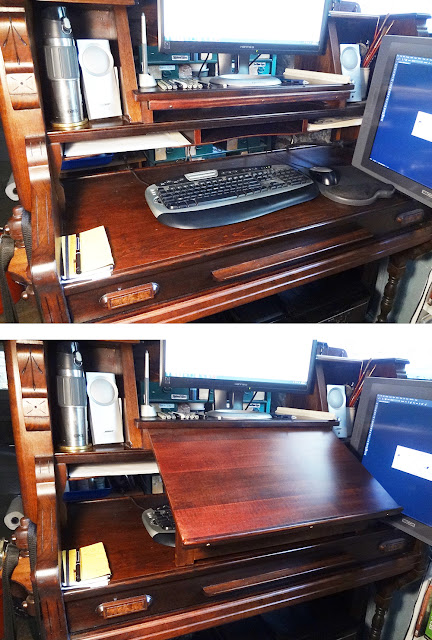 If you want to read a bit about me building the desk so you can make your own, see this article on my blog I wrote about the process:
http://luschekillustrationblog.blogspot.com/2014/03/something-to-stand-for.html

What are your favorite materials digital and traditional?
After ten years of painting, I definitely feel most comfortable working in oils. There really isn’t anything you can’t do with it. I am getting a bit more comfortable with Photoshop and I certainly enjoy it’s speed and versatility. Unfortunately, oil painting does not have an ‘undo’ button. I never work exclusively digitally. I tend to always start by scanning in something created traditionally as a start. Usually a pencil sketch or ink drawing which is later colored on the computer.

What’s your typical workday/work session like?
I am not as much of a morning person as I would like to be. So, I usually get to work around 10 am and will work till I get tired. If I’m in the studio I paint till it gets dark. Often when I get home I move to the studio in the basement after dinner.

What do you do to keep yourself motivated as you work?
If I have work to do, I am motivated. Showing up to the studio is enough. Occasionally a commission will drag but I rarely lake motivation.

What is your dream job?
Doing what I am doing- but for a lot more money.

What do you listen to while you work?
I often work in silence in the studio. When I do listen to music it ranges from classical to contemporary alternative music. At home I often have a wide variety of Pandora stations playing. During baseball season I will always be listening to a game if it’s on. Though this season was pretty frustrating.

What are you reading?
Currently reading a book written called Vision Junkie by the father of my friend Clem Robins and Talent is Overrated by Geoff Colvin.

Who are your artistic influences?
I am most inspired by artists of the Boston School: DeCamp, Paxton, Tarbell and Sargent. I love the illustrators of the Golden age: Leyendecker, Charles Dana Gibson, N.C. Wyeth, Howard Pyle, and Arthur Rackham.
What do you do that is not art related that inspires you?
Most of the other arts can be very inspirational. A good book or film can give me ideas. I get a lot of visual imagery from music too.

I have a biology degree, so I am very interested in the sciences which is a wealth of information to draw from.

What was the best advice you got in your career so far?
I am a bit of a complainer, my very supportive an understanding wife will listen to me up to a point. Generally her advice to me is “Will you just shut the f#%k up and paint something!”

What is your favorite color?
I want to say Red, like the blood of my enemies but that would be weird, so I’ll say Blue Green.