Books By the Banks Poster Unveiling!

Ninth annual Books by the Banks book festival poster to be revealed!!

Aug. 14, 2015 ─ Award-winning artist and comic book illustrator David Michael Beck was selected to design the 2015 Books by the Banks book festival poster. This year’s poster will be unveiled at 6:30 p.m. Tuesday, Sept. 15, at the Joseph-Beth Booksellers in Rookwood Pavilion, 2692 Madison Road.

Beck will be at the poster debut to talk about its creation. A poster signing will follow. Joining him will be past poster artists, including Jeffrey Ebbeler, Ryan Ostrander and Christina Wald. Posters will be for sale, with proceeds benefiting Books by the Banks. This year’s poster is $15 and previous years’ posters are $10.
Also being revealed is the specially designed Rookwood Pottery trophy being awarded this year for the inaugural author awards in four categories: Best Kids Book, Best Young Adult Book, Best Emerging New Talent and Lifetime Achievement.

The 2015 Books by the Banks festival, presented this year by Ohio Humanities, is 10 a.m.-4 p.m. Saturday, Oct. 17, at Duke Energy Convention Center in Cincinnati. Last year, the festival drew more than 125 authors and a crowd of 5,000 attendees. It’s considered one of the largest and most prestigious events of its kind in the region. For details, visit BooksbytheBanks.org. 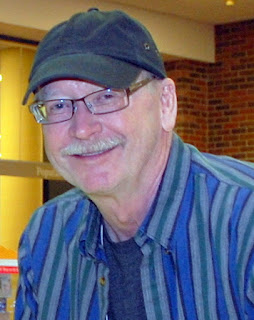 ABOUT DAVID MICHAEL BECK
David Michael Beck was born in Springfield, Ill., in 1950. His academic training was with Wright State University, the American Academy of Art, and the Chicago Academy of Fine Art. He worked in small in-house art departments, studios, and design firms illustrating in a variety of mediums from watercolor, gouache, acrylics and oils, to full tonal pencil, and pen & ink. The underlying editorial, narrative themes evident in his work has won acceptance with many Fortune 500 companies and high-profile periodicals. In recent years, he has developed an impressive body of work in genre illustration covering adventure, science fiction, fantasy, horror, and comic books. His original artwork hangs in the private collection of George Lucas, and his client list includes Hasbro Toy Company, The Grammy Awards, Warner Brothers, Universal Pictures, Anheuser-Bush, Miller Brewing Co., Dow Jones, Harper Collins, Simon & Schuster, Coca-Cola, Sony Entertainment, The Grateful Dead, and Marvel, DC and Dark Horse comics. He resides in Cincinnati.

Thanks to the Cincinnati Public Library for providing the unveiling details. Hope to see you there!

Posted by Christina Wald at 8:10 PM