This Saturday, Aurore Press presents a night of celebration on the collaboration of MATT HART and KEN HENSON and their work, BLUE JAY SLAYER. BJS contains 23 poems by Hart and is fully illustrated by Henson. 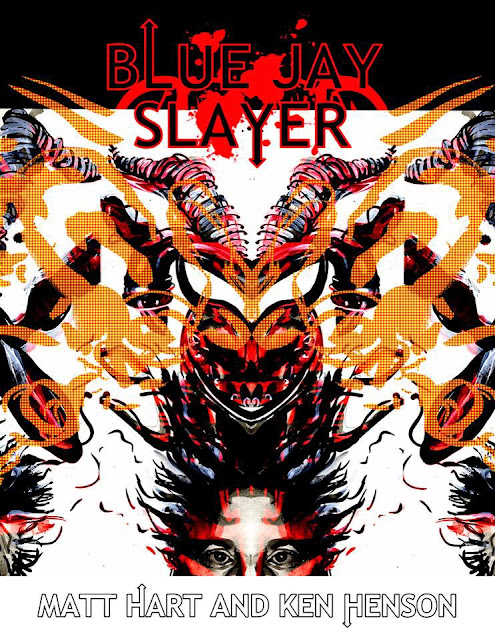 "Poems that will tickle and irritate your brain served alongside artwork that will soothe and delight it." -- Alice Bag, singer, musician, educator, feminist and author of the memoir, Violence Girl: East L. A. Rage to Hollywood Stage, A Chicana Punk Story

"BLUE JAY SLAYER was a pleasure for me to read and visually take in. The drawings are bold, brazen, hauntingly beautiful and tragic at times. I found the poetry to be thought provoking and heavy with textured wordplay...traveling far, painting a picture all on their own." -- Dave Lombardo, drum god and co-founding member of Slayer

"Human nature and desire in its truest, purest form. These poems and illustrations invite us to 'take the light / from delight and make it obvious' which I'm all to happy to do when the work is this damn good" -- Gary Jackson, poet and author of Missing You, Metropolis 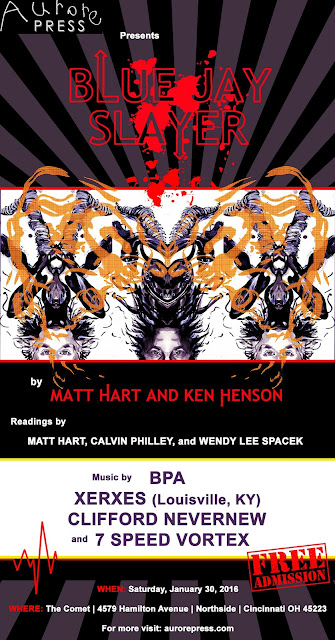 MATT HART is the author of several books of poems, including Sermons and Lectures Both Blank and Relentless (Typecast Publishing, 2012), Debacle Debacle (H_NGM_N Books, 2013) and Radiant Action (forthcoming, H_NGM_N Books). Additionally, his poems, reviews, and essays have appeared or are forthcoming in numerous print and online journals, including The Academy of American Poets online, Big Bell, Cincinnati Review, Coldfront, Columbia Poetry Review, H_NGM_N, Harvard Review, Jam Tarts Magazine, jubilat, Kenyon Review online, Lungfull!, and POETRY Magazine, among others. His awards include a Pushcart Prize, a 2013 individual artist grant from The Shifting Foundation, and fellowships from both the Bread Loaf Writers' Conference and the Warren Wilson College MFA Program for Writers. A co-founder and the editor-in-chief of Forklift, Ohio: A Journal of Poetry, Cooking & Light Industrial Safety, he lives in Cincinnati where he teaches at the Art Academy of Cincinnati and plays in the band TRAVEL.

A Curtis G. Lloyd Fellow at the Lloyd Library and Museum, Ken Henson is the author and illustrator of Alchemy and Astral Projection: Ecstatic Trance in the Hermetic Tradition (LLM, 2014) and the illustrated novella/grimoire HIGH GRAVITY: Werewolves, Ghosts, and Magick Most Black (Oneiric Imprint, 2015). Ken’s writings and art have been published in periodicals such as Abraxas Journal, Clavis Journal, Fiddler's Green, and The Gnostic Journal, and he has presented at SCIENTIAE, Babalon Rising, the Esoteric Book Conference, the Left Hand Path Conference, and the Occult Humanities Conference. He is an Associate Professor and the Head of Illustration at the Art Academy of Cincinnati in Ohio where he teaches studio courses and Art and the Occult.

For more, visit: http://www.aurorepress.com/
Posted by Ken Henson at 8:43 PM