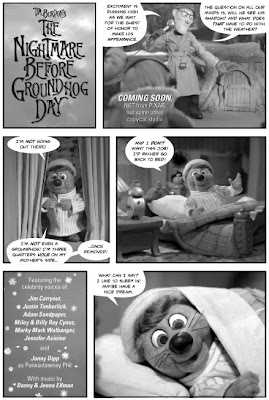 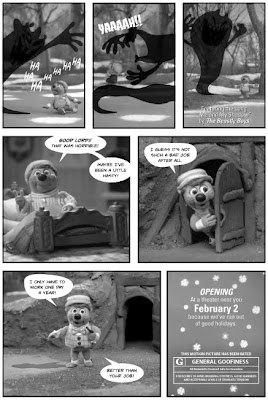 It’s been quite some time since I posted, but I hope to do better in the near future. Among other projects, I’m currently putting the finishing touches on a 90 page graphic novel titled “Midnite Matinee Comics” that uses public domain films in a fumetti-style approach. My intent was to recreate the movie-going experience of the fifties and sixties that includes a cartoon, Rickey Rodent, a chapter of a serial, Commander Bolt Uprite, ads inviting you to go to the lobby and buy snacks and the main feature, Island of Lost Gorillas. All rewritten in new and strange ways. Along with these there are several movie previews, including this one. It originally comes from an old Christmas special that has very little to do with Christmas, as it takes place in February and is narrated by a groundhog.

Enjoy! And have a wonderful Groundhog Day!
Posted by Tim Fuller at 7:31 PM