The Ides of Marge 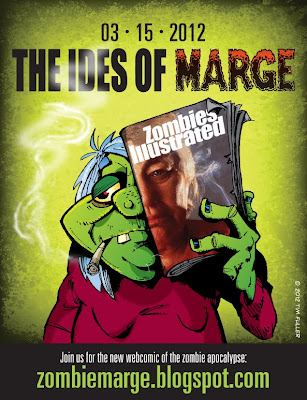 ). There has not been a post there for over a year, so I’ve decided to revamp the site and make it the home for my new web comic, Zombie Marge Comix. Yes, you heard right! Every two weeks I plan to put up a new strip following the exploits of everyone’s favorite undead curmudgeon and her cast of monsters and misfits. Ol’ Marge is set for some wild misadventures. On the in-between weeks I will post comic convention tales, news from my zombie-proof bunker and sneak previews of some of the other books I’m involved with.
So join us on March 15th for the Ides of Marge, celebrate the premier of her first episode. Sign up, post your comments there, who knows, Marge herself may chime in, if she gets ticked off enough.
Posted by Tim Fuller at 4:32 PM