This is a picture I did for my mom, for her birthday that was...um, back in ...ahemOctober. I finished it just in time but then had it printed on gallery wrapped canvas by Harlan Graphics (excellent printer in town that I have experience with) and that took a bit of time. However, now it is finished! I just have to deliver it when we see my folks after Christmas. 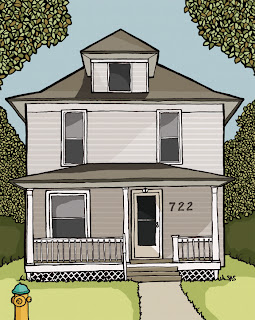 After printing, the colors are a little more muted, which was what I was hoping for. It's a bit of an experiment for me, this new style that I seem to be digging. This is the first architectural-ish of drawing I've attempted. I honestly think it just looks kind of weird. I think I would have added some other things into the picture if I could do it again. At the end of the day, my mom likes it and that's all that matters. It is from a recent picture of the house that she was literally born in and then lived in until she was about 5 or 6. The fire hydrant in the foreground is significant because that is nearly the only memory she has from the house: playing around it. I wanted it to feel like a portrait, but also include that hydrant as an important item.

Hope everyone is having a good holiday season. Looks like the Christmas party was a lot of fun!
Posted by Steph at 9:44 AM