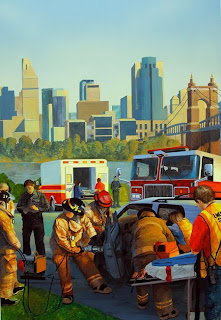 I was commissioned by Drake Rehabilitation Center in Hartwell to develop an image celebrating First Responders. The illustration is to be printed to help raise money and will be presented to Rudy Giuliani, this year's keynote speaker for their annual fundraiser.

The project quickly grew from just having first responders in the image to, "... and maybe we could put the whole skyline of Cincinnati behind them". Lol. They wanted drama without any gore or pictures of injured people, something that would be believable, but in front of the city. My solution was to have the light be where I placed the drama and to try and find a peculiar summer type of light to unify all of the reference. So much information here so I tried to be economical as much as I could, but could see this potentially progressing for months to resolve every piece of information if that amount of time were possible.

John Maggard was so helpful in letting me photograph an extrication drill at Terrace Park Fire Department where I was able to get some much needed reference. I actually went back a second time and shot even more. Without all of those guys letting me stop by and all of his additional help none of this would have happened. Many thanks John.
Posted by bmerikson at 9:53 PM